watch 04:21
Wiki Targeted (Games)
Do you like this video?
Play Sound

Zucchi (ズッチー) is a character in the anime and manga series Battle Spirits Double Drive.

Zucchi is a short man with a small tuft of black hair on his head. He wears a gray cloak. Underneath, he wears an pale green shirt with a belt, olive pants, and brown boots.

In Mistral-Bit's trial, Zucchi has green and yellow wings and wears a large duck beak over his mouth.

Zucchi is cunning and acts sympathetic in battle to throw off his opponent. He also targets and mocks others who he deem weak.

Zucchi is a battler of darkness. He tricked Eto Etoshinmori the 8th and Kinoto into believing that there was a shrine connected to the 12 God-Kings located in a narrow path. Then he separated Shunta Mogami and Yoku Albatrosa from the rest of the group in order to battle the weaker Mei Merryhadda in order to take his God-King. However, he lost the battle.

Later, he was seen at Tatsumi's castle with other battlers of darkness who want the God-King card that General Inui won.

Zucchi uses a green deck, which has contained at some point the following: 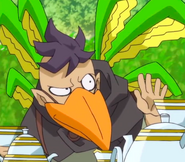 Appearance in Mistral-Bit's trial
Add a photo to this gallery
Retrieved from "https://battle-spirits.fandom.com/wiki/Zucchi?oldid=178530"
Community content is available under CC-BY-SA unless otherwise noted.