Zazie (ザジ) is a character in the anime and manga series Battle Spirits Brave.

Zazie has white hair, which spikes out on the sides, and comes down in one long strip from behind. He has red eyes, which are normally covered in a silver and red mask. He wears a red shirt, which is cut open around his stomach, and green pants.

Zazie comes off as very silly and playful, tending to call others by cute nicknames, and mess with people. However, that persona is an act. The real Zazie, known as Izaz, is extremely dark and manipulative. He's able to mask his true intentions from everyone else.

Izaz, who calls himself Zazie, is the mazoku who ruled over Slovakia. Together with his two twin servants, he grew up in the slums of Slovakia. They lived very poorly, and were without enough food. Therefore, to earn money, they sold their beautiful faces to wealthy mazoku in exchange for donations. He then studied powerful magic, which he used to get rid of those in power before him. When the humans took rule over that country, they also used Izaz and his servants for their beauty. They decided that because both humans and mazoku crushed their hearts, they should all be crushed.

In present time, Zazie began to manipulate those around him. He persuaded Eolus to battle Dan against Barone's wishes by telling him the story of Icarus, conveniently leaving out the part about his wings burning up. Because Eolus lost the battle, Barone was angry, and told him to leave and never show himself again.

Later, he invited Barone and Duc to Yalta, where he proposed the three form a Triple Alliance to protect the queen. His idea was approved, despite the fact that Barone was reluctant to participate.

Zazie also spied on Barone when he met Dan to discuss the 12 Zodiac X-rares. Seeing that he gave Dan information to reach Oct, Zazie informed Rugain, who was angry at Barone. Rugain announced this information when Dan had an audience with the queen, an event Zazie broadcasted to the world, and because of this, Barone was punished. He was forced to give up his territory, Rome, which Zazie inherited.

When Zazie moved into Rome, he was faced with some opposition from Barone's followers, including a human, Zack. Zazie battled with Zack, and defeated him easily.

Along with Geraid, whom he was cooperating with, Zazie began to spread rumors that when Dan collected all of the Zodiac X-rares, the queen would use them to save only a few chosen mazoku. Many mazoku became upset with Queen Gilfam as a result, and uprisings began. Zazie requested that the Triple Alliance (of which he was the only remaining member) take her place, but she refused. Therefore, he used Duc, whom he has brainwashed, to force his demand. He had Duc murder her, which was blamed on Dan and Barone, who had come to Oct. There, Zazie proposed a game of tag. While Dan's allies tried to escape, the mazoku would chase them, and they would have to escape in a time limit marked by a battle between Dan and Duc.

While this game went on, Zazie found Geraid, who was injured and trapped. Rather than helping him, he disposed of him as had happened to the members of Duc's squad. he used their souls to create a Zodiac X-rare, The SnakeMasterDeity Asklepiooze. In the battle, Duc was defeated, but Zazie captured him, and took the 4 Zodiac X-rares in his position for himself.

Zazie returned during a ceremony Barone was holding, in an attempt to unite humans and mazoku. There, he was without his mask, in his true persona. Zazie defeated Barone in battle with Asklepiooze. He claimed he wanted nothing afterwards. However, during the battle, he had incited the mazoku. Many turned against Barone, and began to follow Izaz.

Because Oct, the mazoku continent, was near destruction, the mazoku living there were being evacuated. Followers of Zazie hijacked the ships and threatened them with bombs. To deal with this incident, Dan, Rugain and Gilfam went to Slovakia to meet Zazie. Dan intended to battle him, and learn of Zazie's true intentions. Zazie trapped the other two, risking their freedom on the battle.

During the match, Zazie's mask broke off, confirming the suspicions that he and Izaz were one in the same. He told Dan the story of his past, which angered Dan, who saw it as childish. Dan defeated Zazie, using a double brave spirit. Afterwards he invited Zazie to come to the pole and witness their plan to save the Earth. Rugain and Gilfam also requested he work to rebuild Slovakia.

In the epilogue, he's seen in the audience during Barone's speech.

Zazie's main deck is blue, and revolves around deck destruction. He later uses a different style deck, with The SnakeMasterDeity Asklepiooze. 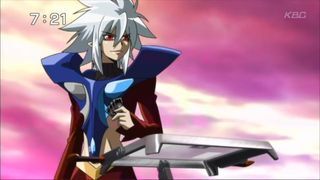