Watari is a short boy with brown hair and black eyes. He wears a black, white and red ninja-like outfit. He has a yellow headband with cherries on it.

Watari, like all the Galaxy Triumvirate members, is a scheming liar with over-dramatic tendencies. He tends to use the phrase "disappointing" a lot.

Watari is a member of the Galaxy Triumvirate. He claims to have a charming singing voice.

He battled against Rei, and was defeated. Afterwards, the Galaxy Triumvirate returned to their leader, Miroku, who was mad at them for failing to get the compass. He ordered them to find it.

He and the others seem to have a history as performers on planet ASAKUSA.

Watari is a fan of Magical Star. He got the rest of the Triumvirate to help him pretend to capture her, so that she wouldn't have to work for a day when she was tired. Mugen wanted to save Magical, and challenged Watari to battle. However, Rei ended up doing the battling for Mugen. Watari lost, but he didn't mind so much because Magical was grateful to him, and now they shared the secret of what really went on that day.

Watari was nearly arrested, when he was suspected as the theif of a Magical photo from a museum. Rei and the others came to his aid, as the Triumvirate promised to give them the space compass if they could help. It was revealed that Watari was innocent, and the detective himself was the thief. However, the Triumvirate wouldn't return the compass anyway.

Before entering in the Justice Cup, Watari decided he wanted to move on from Magical, and work on imporving the Triumvirate's reputation. Although he got a new key card, Noisy Raven, he was matched against Magical herself in his first battle, and lost. After losing, he seemed to return to being a Magical fan.

When the final battle against Nakes begins, the Triumvirate decides to flee. However, when they notice Miroku isn't punishing them, they feel bad for having never done anything useful, and decide to save him. They break inside of Nakes to pull him out, along with Denebola and Rukinosu.

In the epilogue, they join Miroku on this aplogy trip, while searching for the Ultimate Battle Spirits Neo.

He is a burst user, who uses many white spirits. 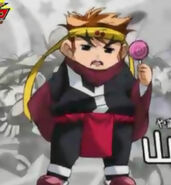 Retrieved from "https://battle-spirits.fandom.com/wiki/Watari_(Zero)?oldid=104098"
Community content is available under CC-BY-SA unless otherwise noted.