Toshiie Homura (炎利家) is a character in the anime and manga series Battle Spirits Burning Soul.

"Now, this is my soul. You can have it! My flame is overflowing! Burn up, LeonLancer! I activate Soul Drive!"

Toshiie's hair is black in the back, but the front is colored red, and spikes up. He has red eyes, and red markings under his eyes. On the side of his hair is a clip. He wears a green shirt which is cut short, and tan pants. He has a mostly yellow jacket over his clothes, with a red design on the bottom and black stripes. It has a fur trim around the neck.

Toshiie is a strong and passionate person. In battle, he likes to cause total destruction.

Toshiie is a red S-Class card battler in the Kantou region, and leader of a gang. He fought over for control over Musashi many times with Kanetsugu Houryokuin, and although they battled each other many times, there was never a winner to their conflicts.

He later became interested in Yukimura, and challenged him to a battle. He ended up losing, but was impressed that there was a stronger red-user than him.

Toshi became upset that not only could he not beat Yukimura, but that Yukimura had more difficulty against other opponents than him, as he didn't even need his key card. He kept battling in hopes of training himself for a rematch.

When Toukichirou Mashira attacked, hoping to take territory from him, Toshi was annoyed and challenged him. He managed to defeat Toukichirou, driving him away.  During the battle, he recalled his past. When he was given Sengoku-Tiger, his boring life became exciting. The passion he found led to many other red users becoming his followers. Thus, he was unhappy when Toukichirou kept mocking red users.

After his battle with Toukichirou, Toshi again challenged Yukimura. He now had a brave spirit, which was strong enough to go against Souldragon.

Once the date for the tournament was set, Kanetsugu and Souun also appeared, wanting to face Yukimura again. Toshi was annoyed by this, and insisted that he would be the first to battle. The other two arranged to fight each other, and the winner would face whoever won in Yukimura and Toshi's battle. As for the battle, Toshi again lost. Regardless, he accepted gracefully, but declared that he'd one day become the strongest red battler again.

Toshi teamed up with Yukimura and Souun to liberate Musashi, when it was under the control of Dairokuten Maou and his group. He ended up battling against Ranmaru Shikigami, and won.

After the announcement of the Warring States Championship, he, Souun and Kanetsugu all gathered to decide who would be on Yukimura's team. Toshi and Kanetsugu battled, and after Toshi lost, he decided to leave Musashi. Before this, he encountered Yukimura, telling him they would meet again in the finals of the tournament.

Toshi went to Toukai, along with Nagayori, who followed after him. The two of them formed part of a red-user team.

Eventually, Toshi heard of Shingen Shidou, an S-Rank purple user who wasn't participating in the championship. Interested, he tracked down Shingen and requested for him to join his team. Shingen refused, believing that battlers are lone wolfs who didn't need help from others. He then crossed a bridge and began to destroy it as Toshi tried to follow. However, he still managed to cross safely, earning Shingen's respect.

Afterwards, Toshi's team made it past the preliminaries and entered the first official round of the championships. Their team was matched against the team representing the Kyuushuu-Okinawa area. Toshi battled against Koretoyo Hinokuni and won, showing off his new Ultimate, The SengokuSixGeneral LeonLancer.

The second round of the tournament required each battler to be split up from their teams. Toshi battled against Kagetora Koshirakawa, a loyal follower of Kenshin Shirogane, another S-Rank battler. Kagetora claimed to be Kenshin's "shadow" and would always fight for him loyally. However, Toshi, believing that one should battle for themselves, won the match.

During the quarterfinals, Toshi was matched up against Kanetsugu, and both sides believed that this battle will settle their long-fought battle over Musashi. This battle turned out to be very intense, with Toshi narrowly winning at the end, ending their conflict once and for all.

Later, Souun had her battle against Dairokuten Maou and became fatally injured after losing. Toshi showed minor concern for this, and approached the door of her hospital room before deciding to leave.

After both he and Yukimura reached the semifinals, he was certain that he would be able to have his battle with Yukimura in the finals. However, before he could, he had to face Dairokuten Maou to avenge Souun. Determined to be able to fulfill their promise, Toshi battled against Dairokuten Maou, only to face defeat. In the end, he was left in the same state as Souun. 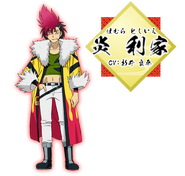 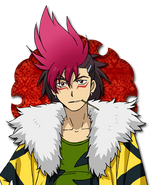