Suou Rakels (スオウ・ラケルス) is a character in the anime and manga series Battle Spirits Sword Eyes.

He has purple eyes and spiked light blue hair. He has a purple marking under one eye. He wears a purple shirt, which is ripped on one sleeve, revealing bandages on his arm. He wears tan pants, black boots a brown cape and goggles around his neck. He has a black fingerless glove over one hand, which appears to be metallic.

Suou badly wants to become human, to be accepted by Rirove. He doesn't fully understand what it is to be human, and many of his actions come off as awkward, but he is extremely determined to complete his quest.

He is actually aggressive and rude to other people, but he still loves Rirove.

Suou, despite appearance, is non-human. He was created by Rirove using alchemy and apparently, according to Rirove, is a failed product.

He ran away, trying to find a magical tree that gives life. When Tsurugi and the others met him, they promised to help search, but they were interrupted by Rirove, who tried to kill him.

Upset that he was unwanted, Suou went off again, with the others searching for him.

When Suou met with the other Sword Eyes of Light again, he decided to help them in their plan to save Grenada. It would be his first time doing something for someone else. Although they failed in their mission, Suou was amazed by what all the others were capable of. He left them afterwards, to continue with his own mission.

When Suou met with the other Sword Eyes of Light, during Yaiba's birthday celebration, it was revealed that he didn't know how to play Battle Spirits. Long volunteered to teach him.

Later, Suou was adopted by Chun and his wife, a rich couple living in Kamata. This only lasted for a short time, because he realized he wasn't really happy with them. He wanted to help Tsurugi and the others instead.

After the Sword Eyes of Light met with Haqua, Suou convinced him to return to his home, even though he was afraid of a ghost there. He and Haqua seem to get along well.

When Yaiba had the Sword Eyes of Light captured, Grenada allowed Suou to escape, along with Hagakure. With Long's help, Suou and Hagakure retrieved Bringer, who had been badly damaged, and had him repaired. A light resonated from Bringer's eyes, but Suou assured the others that it was a warm light, and Bringer was being protected. In fact, he was temporarily holding Tsurugi's red Sword Eye of Light.

Suou went with Hagakure to Kolga village when it was under attack. He was attacked by Rirove there. He, Rirove and Hagakure were sucked into the Green Deity Sacred Tree. Hagakure and Rirove battled, and during the battle, something seemed to be weakening Rirove. Suou was concerned for him, as his brother. He decided to stay with Rirove after the battle.

Because Rirove was dying, Suou volunteered to give up his soul to save Rirove. This led to his death, but he was happy to be able to do something for his brother. Rirove was devastated by this, but the purple spirits in Stoke, who were touched, seemed to revive Suou. The Suou that returned was Rirove's true brother. He had with him the purple Sword Brave of Light.

Sora appeared, planning to capture the other Sword Eyes. Suou challenged him to a battle, which he won. After the battle, Suou went off on his own.

When Tsurugi and the rest found Suou again, he was the leader of a gang in a black market. When some thugs seemed to threaten the gang, Suou turned one's weapon into a snake using alchemy. Rirove scolded Suou for using alchemy for ridiculous reasons. Tsurugi tried to convince Suou to return with them, but Suou refused. After a battle, which Tsurugi won, Suou admitted that he loved Rirove and returned to his brother.

In the ritual to summon the Sword of Judgment, Suou battled against Rirove and won.

Suou gave Tsurugi the card Amethysnake to use in the final battle. While it was going on, he tried to get the Stingers away from the arks.

In the epilogue, he seems to be a construction worker.

In the epilogue, he lives together with Rirove. His personality does not change back to being rude.

Suou's deck focuses on spirits that resemble snakes, and focuses on charge. 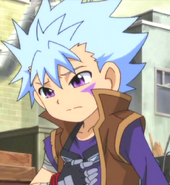 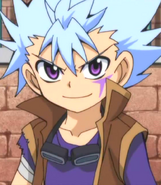 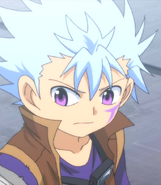 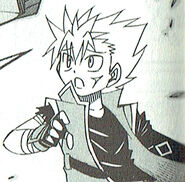 Retrieved from "https://battle-spirits.fandom.com/wiki/Suou_Rakels?oldid=149770"
Community content is available under CC-BY-SA unless otherwise noted.