Souun Gunjou (群青早雲) is a character in the anime and manga series Battle Spirits Burning Soul.

"Come forth, King of the sea! In the name of the sacred blue ruler... who is above all creation in heaven and Earth! Engulf everything! The Blue Seas WisdomKing... Descend!"

"From the depths of the blue ocean... Now you are released from your deep sleep! I summon The LotusMonarch Senju!"

"Sea of Mother Nature! Grand ocean! Now is the time to show yourself! Soul Burst activate!"

Souun has green eyes and long blue hair, in which she wears a ribbon. She wears a light blue shirt under a blue and white short-sleeve jacket, and short blue shorts. From her shirt comes a cape-like material. Her belly is exposed under that material. She has tall black boots, and a blue band on one wrist.

Souun is a powerful and imposing girl who clearly speaks her mind, no matter how harsh. She has little tolerance for weak opponents.

Souun is the leader of a group of beach battlers. She is a blue battler, but formerly used green.

When she heard that Toshiie was defeated, she saw this as an opportunity, and decided to head to Musashi. When there, she met Kanetsugu, whom she realized also came to face Yukimura.

Sasuke declared that anyone who wanted to face Yukimura would have to beat him first. Souun was annoyed, but agreed to battle him. She won easily. Although they were kicked out of the arena by Toshiie's gang afterwards, she didn't mind, because a stadium was needless when both battlers were S-Class. Afterwards, she had a battle with Yukimura on the streets. This time, Yukimura won thanks to his key spirit, although it was very close. Souun accepted defeat, but intended to win the next time.

Souun appeared at Toshiie's stadium a while later, hoping to have her rematch with Yukimura. However, Kanetsugu was there as well, and Toshiie had already laid claim on Yukimura before the both of them. Therefore, they decided on a tournament. Souun would face Kanetsugu, and the winner of their match would face the winner of Yukimura and Toshiie's match. Souun hoped that Yukimura would win, which he did.

Before Souun's match with Kanetsugu, it was revealed that Souun and Kanetsugu were once on the same team. Souun admits that she once admired Kanetsugu and his strategy, but wanted to surpass him, thus she left and found her own battle style, which was blue deck destruction. This had the power to ruin any opponent's strategy, because their cards would be discarded before they could use them. Souun lost the battle, which Kanetsugu claimed was because she was too fixated on a single victory, and not a larger dream. She was extremely angry, claiming not to understand Kanetsugu at all. Soon after her defeat by Kanetsugu, Souun also lost a match against Toukichirou Mashira, losing her stadium as a result. She was depressed over her constant losses, but her followers continued supporting her.

Later, Yukimura and Toshi appeared before her, requesting that she help them free Musashi, as Kanetsugu and others were causing problems, such as forcing everyone to only use a specific deck. Souun didn't believe Kanetsugu would do this, and it was confirmed by Hanzou that he was innocent. In truth, it was the work of Toukichirou and Ranmaru, and the wire-puller behind them. Souun seemed willing to help, but first wanted a re-match with Yukimura. Losing this match as well was only further damaging to her, so she decided to stay back and think.

After this event, Ichi Tenma met with Souun. She helped Souun remember her love for the sea, and also gave her a Soul Burst card. This led Souun to changing her mind and joining with Yukimura and Toshi. She faced Toukichirou, and defeated him this time.

When the Warring States Championship was announced, Souun met with Kanetsugu and Toshi to decide who could be on Yukimura's team. Souun was not given the chance to battle, as after Toshi lost to Kanetsugu, he gave up his spot. Thus, Souun became a member of the team, and began training with Yukimura and Kanetsugu.

In the preliminary tournament's first round, Souun defeated one of the Ushio brothers.

She uses a blue deck.

Her deck has contained at some point the following: 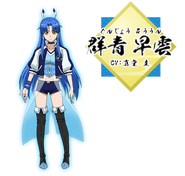 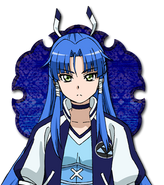 Souun In Manga
Add a photo to this gallery
Retrieved from "https://battle-spirits.fandom.com/wiki/Souun_Gunjou?oldid=133405"
Community content is available under CC-BY-SA unless otherwise noted.