Sora Ryuyo (ソラ・リュウヨウ) is a character in the anime and manga series Battle Spirits Sword Eyes.

"Cut down the land... flash of blue light! The BlueWaterGreatSword Maelstorm!"

His head is shaven, but he has a brown braid coming down from the side. He has a scar on his face. He is dressed in blue, with an orange belt and long white jacket. He has black wrist bands.

Serious and responsible, he seems interested in doing what's in the best interest of the people in his village. He has a distrust of royals and their droids. He likes to talk about love.

Sora is the blue Sword Eyes of Light. He is a droid mechanic and lives with his younger brother, Long. He has been a friend of Kizakura's since he met her as a child at a stand selling secondhand parts.

Tsurugi came to him when Bringer was damaged to get repairs. Sora refused, and wanted them to leave, because in his village, Atlantian droids were hated. Tsurugi challenged him to a battle. Because Sora lost, he agreed to do the repairs, and had realized during the battle that Bringer was different from most droids anyway.

At first, Sora was reluctant to join with Tsurugi, but changed his mind and tracked Tsurugi down later. He and Long bought an airship he made, to help them on their travels.

Soon after. Sora battled Rirove, the purple Sword Eyes of Darkness, because he was unhappy about how Rirove treated his creation, Suou. Sora won the match, but Rirove didn't seem to have learned anything.

In Pacifice, Garudos was seen. Sora challenged him to serve as a decoy. Tsurugi and the others planned to sneak onto Garudos' ship, to get to Atlantia. If Sora lost, he would have to give up his Sword Brave. Although Sora did lose the match, he was saved by Tsurugi's friends from Pacifice. He remained there with Kizakura, while the others successfully left.

He rejoined with Tsurugi and the others soon after, in Kamata.

Sora and Haqua were later captured by Yaiba. Kizakura, who was also a prisoner, was released to find Tsurugi, and bring him back. The two would suffer some consequences if she didn't return in a certain amount of time. Hoping that Tsurugi would never have to be bought there, they tried to escape. Unfortunately, Garudos stopped them.

In the last part of episode 30,  he and Haqua seems to be controlled.

Sora was sent to Kolga village, to claim it for Atlantia. He gave the residents 100 chances to defeat him. Hagakure became the 100th challenger. He defeated Sora. Because Sora now discarded his old feelings of love, Hagakure tried to remind him of who he used to be. Sora seemed to be breaking free from brainwashing, but he was captured again.

Garudos ordered Sora to capture Rirove. When Sora went to do this, Suou challenged him to a battle. Sora planned to leave after losing the battle, but Kizakura stopped him, and offered him cookies. The cookies were extremely spicy. Kizakura rationalized that this would be able to save Sora, because he's a sweet person. Sora broke free of his brainwashing, and asked Kizakura for some real sweets. She promised to make him some once they left Stoke.

In the ritual to summon the Sword of Judgment, Sora battled against Brau.

For the final battle with Garudos, Sora left Tsurugi the cards The Fighter of Light Randall and The Warrior of Light Gaius. While Tsurugi battled, he tried to get the Stingers away from the arks.

In the epilogue, he and Long are doing work on their transport.

Sora in the manga has the same background as in the anime. At first he wants to stay in his town as an inventor and mechanic, but he joins Tsurugi after his town is attacked by Garudos and Zardo. In the epilogue, he goes on another journey with the Sword Eyes of Light.

He uses a blue light deck. 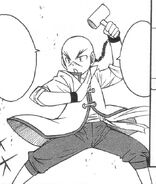