Sasuke Akatsuki (暁佐助) is a character in the anime and manga series Battle Spirits Burning Soul.

Sasuke is a young boy with messy spiked brown hair and brown eyes. He wears yellow ninja's clothing, with images of shuriken on the front. Underneath his outfit is a black shirt. On each wrist is a red band.

Sasuke is cocky and wants to make a name for himself. He is unskilled at Battle Spirits due to playing too cautiously.

Sasuke is a beginner card battler from Musashi. He wanted to become famous, so he challenged the S-Class card battler Toshiie Homura. The members of Toshiie's gang wouldn't allow this, so he had to instead battle Nagayori Akai first. Sasuke lost the battle, because he was too focused on protecting his life. Afterwards, his deck was stolen, but Yukimura Rekka won it back for him. 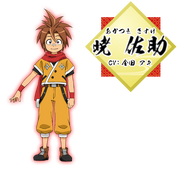 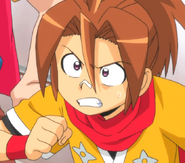 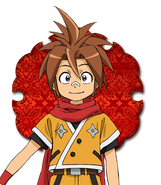