Salt is a yellow and black robot, with a human like face. He seems to be wearing an apron, and his head is bandaged.

He acts cheerful and enjoys cooking for Rei. He tends to talk in puns.

Salt is a robot who serves as Rei's personal cook. He can only make pizza.

He formerly served on the COWCOW. He left to train, and then couldn't find the ship again. Salt was reunited with COWCOW eventually, but was upset when he learned that they were cursed and turned transparent. This was because of Ultimate-Beelzebeat, who didn't accept them as his master. When Rei got Ultimate-Beelzebeat, the curse was broken, to Salt's relief.

Salt was revealed as a card battler when he challenged Denebola, in order to protect Rikuto. During the battle, he recalled the time when he first met Rei in a scrap heap. He cooked pizza for Rei, and rediscovered the joy of it, after having been rejected in the past for it. Salt lost the battle, and as a result, the compass was taken. 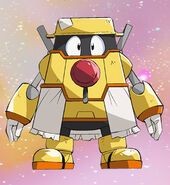 Retrieved from "https://battle-spirits.fandom.com/wiki/Salt?oldid=117113"
Community content is available under CC-BY-SA unless otherwise noted.