Rirove Rakels (リローヴ・ラケルス) is a character in the anime and manga series Battle Spirits Sword Eyes.

"Three-headed dragon from the front gate... Snake from the side gate! I summon The BlackCorpsEmperor Baldanders!"

"Wandering sword from the realm of dead! The Criminal's SkullBlade Executioners ! Plant your purple mystery to the battlefield!"

He has long black hair and purple eyes. He wears purple and yellow robes with a red cloth over one shoulder, and a skull necklace. He has another piece of jewelry on his forehead. He carries a rose with him.

He is a narcissist, and he hates anything that isn't perfect, to the point of wanting to destroy these things. He doesn't like crowds, which is why he refused to join Yaiba. Rirove always keeps a calm and composed attitude, even when he loses to Yaiba and must serve him, but when in the heat of a battle he has a deranged look on his face.

Rirove is the purple Sword Eyes of Darkness. He comes from Stoke, an underground land of alchemy masters. He seemingly created Suou, using alchemy. Because Suou was a failure, he wanted to destroy him. Although he loved the original Suou, his brother, he calls this Suou a "doll of bones."

Kizakura opposed him, so Rirove decided he had time for a battle and accepted. Using his X-rare, he won the match, and went back to chasing Suou.

He later battled Sora, and this time was defeated, but he wasn't interested in taking Sora's advice as a fellow creator of "life," and still wanted to destroy Suou. Then, he was confronted by Garudos, who wanted him to join with the other Sword Eyes of Darkness. Rirove went to Antlantia, but refused.

To catch Suou, Rirove wanted to use Hayatemaru as an alchemy ingreedient. Not wanting to give up his partner, Hagakure battled against him. Rirove won, but only took one feather, which had a tracker Garudos planted on him earlier, but removed it.

Rirove followed the feather to Kamata. There, he met Gordy, who was sent to bring him back to Yaiba. Gordy informed Rirove that it was actually illegal for someone from Stoke to come to Atlantia, and even destroyed a device he was using to track Suou, Rirove decided to see Yaiba to negotiate this law. Yaiba agreed, as long as Rirove would battle him. If he won, Rirove would have to join him. Because Rirove lost the battle, he had to remain with Yaiba.

Rirove was offered to lead the purple army, but chose not too, explaining to Amarello, who he supposed was ordered to watch over him, that he only wanted freedom to move around in the city. He then goes on about how the Sword of Judgement interests him. He later met with Garudos, where he inquired about his own reasons for the Sword of Judgement, which Garudos denied, stating he only wanted Yaiba to have it.

He was with the other Sword Eyes when Bringer was captured, when he questioned why Tsurugi cared so much about a droid that was programmed to obey him. Afterwards, he watched Brau and Bringer's battle.

When he met up with Garudos again, he asked if something was wrong, but said it was nothing. Garudos then asked Rirove to check something for him, which led to him discovering Tsurugi's current location to be in Stoke. He was asked by Yaiba to go there and look for him.

Rirove was surprised to see that Tsurugi was now a Sword Eyes of Darkness. Tsurugi challenged him to a battle, to decide whether he'd return to Atlanta. Rirove accepted, in order to test Tsurugi's dark power. During the battle, he tried to tell Tsurugi that if he used darkness, he would eventually be controlled by it. He lost the match, and decided to report what he'd found to Yaiba.

He followed Suou to Lemurion, still planning to kill him. However, he, Suou and Hagakure were sucked into the Green Deity Sacred Tree. Once inside, Hagakure received his Sword Brave, but Rirove believed that wasn't the only reason they were drawn inside. Hagakure challenged Rirove, saying that he would have to give up on Suou if he lost. Rirove did lose the battle, and something seemed to be weakening him. Suou, concerned for him, wanted to stay by him. Rirove was upset that the doll of bones he hated was pitying him, though.

Because Rirove was dying, Suou offered him soul to save Rirove's life. He was devastated to find that Suou was dead. His tears resurrected Suou, but it was the original Suou that appeared. Suou had no interest in staying with Rirove, and claimed to hate him. However, Tsurugi convinced Suou to admit how much he really loved his brother. Rirove was very happy to have Suou back.

In the ritual to summon the Sword of Judgment, Rirove battled against Suou. He lost, but didn't mind.

While Tsurugi went to battle Garudos, risking all of Lengdia, Rirove and Yaiba headed to Stoke. They used alchemy to summon spirits, which would try to stop the Iron Hammer of God from crashing down. Once this was finished, Rirove went to help evacuate the people of Stoke.

In the epilogue, he goes back home to continue studying alchemy.

He uses a purple rush deck.

Despite being a Sword Eyes of Darkness, Rirove is very neutral when he encounters the Sword Eyes of Light, even engaging in small conversations with them. He was even asked by Long to join them, but declined due to his dislike of crowds. 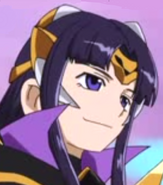 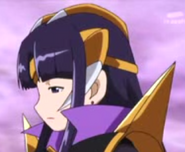 Retrieved from "https://battle-spirits.fandom.com/wiki/Rirove_Rakels?oldid=149776"
Community content is available under CC-BY-SA unless otherwise noted.