"Rise, burning dragon! Ultimate-Siegfried! Fire up with me!"

"Fang of fire! Soul of steel! I call the strongest name! Ultimate-Siegfrieden! Charm me with your gallant figure" - Burning version

"Dignity of the king! Breath of the earth! Rise to life, with your green wind! Ultimate-Kingtaurus!"

"You should have a taste tonight of the depths of fear, with the chorus of chattering teeth.Thank you for waiting so long. Appear from the realm of the dead! Ultimate-Beelzebeat!"

"Smash everything, blue hero who pierces the heavens! Smash! Smash! Ultimate-Alexander, descend, and stand below me!"

"Great explosive storm! The leader of the red-hot party is here! Ultimate-Siegwurm-Nova!"

"Thanks for cheering, everyone! Ultimate-Rean, come on!"

Rei has spiky, taupe-black hair, and brown eyes. He wears a red shirt with a blue and white jacket, white pants with yellow stripes, and brown shoes. He has an orange band tied in his hair, and one on his leg. He wears red and yellow fingerless gloves with red jewels on them. He has a similar jewel over his chest. He also has bandages on his arms. He has four deck cases, colored red, white, green and black.

Rei loves exciting battles, especially when he has a strong opponent. He calls himself "The Number One Star" and is obsessed with being the number one. He gets burned up easily and is very interested in getting the ulitmate treasure, The Ultimate Battle Spirits.

His only known weakness is a fear of ghosts.

His personality depends on his battle form.

Years before the story began, Rei seems to know Kiriga, who was close to him. However, Rei has somehow forgotten of his past. Rei is an ultimate-user and Card Quester, who is seeking The Ultimate Battle Spirits. He travels through space in his ship, The Number One Star Ship. His partner is a dragon named Mugen, who turns into the card Mugendra. He is also friends with a robot named Salt, who cooks pizza.

While searching for information at a bar, he met a boy named Kiriga, who was said to be the strongest in the guild. They nearly got into a battle, but then a distress call came. This was from a girl named Laila. She and her brother were attacked by guild members. Rei challenged the Galaxy Triumvirate, to take the space compass they stole. His opponent was Hashibuto. He won the match, and then beat the other two members just as easily. When he got the compass back, he returned it to Rikuto.

Rikuto asked Rei if they could come to space with him. He explained that the space compass can find the Ultimate Battle Spirits. He accepted, and invited Rikuto and Laila to be crew members of his ship.

Rei and his crew arrived on the planet Gunrock, where members of the Seven Galaxy Generals (outlaws from the guild) were forcing the people to work for them. The reason they took over the planet was to find crystals there. Rei was ab

le to defeat both Almeida and Goin, and drive them away.

As the group heads to their next destination, Rei has a dream, where he feels like someone is calling him. They decide to take a detour and visit planet Ice Cube, because an ultimate crystal was found there. Rei battles against Tsuruhashi, risking the crystal, and wins. Realizing that it was the ultimate inside that was calling him, Rei is able to release it. The card was Ultimate-Seigfrieden, and it chose Rei as its master.

After that Rei met Eris, a pirate and the captain of her own ship. Gedam chased them along with Zard. Eris is planning to battle but Rei challenged them instead. After Rei won the match, Eris gave Laila a challenge to see if she could find the Ultimate Battle Spirits first.

Tohno gave Rei and his group tickets to planet Greensmoothie, and resort planet. Soon after arriving there, the Galaxy Triumvirate stole Rei's decks. Fortunately, Kiriga arrived to win them back. Also, while on that planet, another ultimate crystal appeared. Inside this crystal was Ultimate-Kingtaurus. Rei made a contract with it, and gained a new green form, Zero the Hurricane. However, before he could take the card, Bomber got it. Eris took it back after winning to Bomber.

While in the second warp point Rei was challenged by Kiriga to a battle, risking the space compass once again. Kiriga lost for the first time, allowing Rei's company to enter the warp tunnel.

Rei also got to have a match against Eris soon after, which he won.

While in the Sargasso area, Rei met Kiriga again at a Potatcheesse restaurant. He asked for another battle with Kiriga, who accepted on the terms that both would risk an ultimate. Kiriga, who used his white deck for the first time, won. He took Ultimate-Odin. Rei said that he would get Odin back someday. Because the card was gone though, the Number One Starship's power dropped, and was sucked up in a space storm.

After escaping the storm, Rei senses an ultimate crystal. That crystal was on a ship called the COWCOW, and its crew had been cursed for trying to take it when they weren't worthy to be its masters. Rei defeated both of them, sucessfully winning the crystal. Ultimate-Beelzebeat was impressed that his curse didn't work on Rei, so he allowed Zero to be his new master. A new form, Zero the Flash was born.

After eating frozen pizza with frozen cola, Rei started to get hiccups. Each time he hiccuped, he would change form. He couldn't turn back from Zero to Rei, despite being out of battle. He was taken to the hospital, and was told that transforming was putting a strain on his body. He also found that he was special among ultimate users, because he had an ultimate symbol on his chest. Laila and Rikuto cured Rei by using a magical item on him, so he returned to normal.

To get the blue ultimate crystal, Rei and the others went to the shrine of chaos, with Colin and Hansoro from the Galaxy Tourist Bureau. Rei was split into four, for each form of Zero he had. The forms had to battle mirror images of themselves. Each of them won the match, allowing Rei to claim Ultimate-Alexander. But Alexander rejected him, saying he wanted someone stronger... Rikuto. This was a misunderstanding, and Ultimate-Alexander decided Rei would be okay as a master. However, he really wanted his old master, Kiriga, who had abandoned him in the shrine. Rei learned this when he tried to prove his worth to Alexander.

On planet Kachidonia, where Rei went in order to meet Kiriga, he decided to be a bodyguard for the Arins family. This led him to battling Kiriga, who was bodyguarding the rival Terence family. During the battle, Kiriga denied knowing Ultimate-Alexander, and Alexander decided to finally accept Rei as a master. After winning the battle, Rei broke the divider on planet Kachidonia, which fixed their extreme weather problems. After the battle, he invited Kiriga to join him, though Kiriga said he would have to think about it.

Rei, Kiriga and Eris were called by Ultimate-Siegwurm-Nova. He states that he's one of the three pillars, ultimates who guard the Ultimate Battle Spirits from invaders from another dimension. Nova turns into a card, and goes to Rei. Afterwards, Rei and the rest of his crew head to the third class. However, they find that the gate was destroyed. There, they meet Hansoro, who challenges Rei to a battle. He says if Rei wins, he'll tell him who destroyed the gate. However, if Rei were to lose, he would have to hand over all his ultimates, and the space compass. Of course, Rei does win the battle, and manages to cross through the gate with Nova's power.

When looking to eat crab pizza, Rei has no luck, but instead finds a hurt Kiriga. He learns that Kiriga battled against Rukinosu the Cancer, one of the invaders. Rei became angry when he learned that Rukinosu hated ulitmates, and decided to find and defeat the crab himself.

Salt won a contest, where he could co-star with Magical, but Magical bought Rei and the others along too. This was good for him, because he heard there was an ultimate crystal there. Rei passed the test of illusions, and got Ultimate-Rean. He battled against Dongorosu, who also wanted the ultimate. There, Rei's idol yellow form, Zero the Glint, debuted and won his first battle..

When the space compass was stolen by the Triumvirate, it ended up as a prize in the Justice Cup, held by Justice Tachibana. Rei promised Rikuto that he would get it back, and entered the tournament. His first opponent was Zard, whom he defeated. After finally defeating Hashibuto in the last round, Rei was the winner. Almost. Denebola revealed that he would have to defeat her first to have the compass. Rei did defeat Denebola, and win the compass back. However, the compass he received was just a fake. Miroku had the real one.

Rei and his crew tried to track down Miroku, and eventually discovered Hansoro, who had lost his memories. They took him back to the ship, and took care of him.

They then made it to the Treasure Ship, where they met Kiriga, Eris and the others. Rei traded Kirga Ultimate-Alexander, and got back Ultimate-Odin in return. Afterwards, Kiriga showed Rei how to get back his memory. Rei initially refused, which infuriated the past Rei, who appeared. The two ended up battling, with the loser disappearing. Throughout the battle, flashes of Rei's past returned to him. When he learned about his past with Miroku, he became curious as to what happened to his former friend. Ultimately, the present Rei won the battle.

Rei, along with Kiriga, battled against Miroku and Nakes respectively. Rei had his second ever loss at this time. Though Rei was upset over how Miroku had changed, Laila and Rikuto encouraged him to bring the old Miroku back. Soon after, the group reached the Ultimate Battle Spirits. Miroku and Nakes attacked there. Nakes then consumed both the Utimate Battle Spirits and Miroku. Rei was furious when this happened, and determined to stop Nakes.

After both Eris and Kiriga battled Nakes, their whereabouts were unknown. Rei faced him last. Before the battle, Ian and Chocola, as well as the last two Tri-Dragon Deities, joined his deck, and he took the ultimate symbols of Kiriga and Eris into his body. Rei transformed into a new persona, Zero the Ultimate. With his deck full of dragons, he finally defeated Nakes, saving space in the process. He was rewarded with the ultimate Battle Spirits. After the battle, Rei found that Eris and Kiriga were alive. While Eris revived with her ultimate symbol returned, Kiriga was still dying, due to Nakes' poison. Rei sacrificed the Ultimate Battle Spirits to cure him.

After that ordeal was over, Rei told Miroku that he should apologize to all of space. Then, he left with his crew, to return Laila and Rikuto to Earth. The separation was only temporary, however, as he picked the two up again to join him in a quest for the newly discovered Ultimate Battle Spirits Neo.

Rei the Number One Star 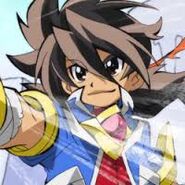 Retrieved from "https://battle-spirits.fandom.com/wiki/Rei?oldid=141249"
Community content is available under CC-BY-SA unless otherwise noted.