View source
watch 02:46
The Quarry - The Loop
Do you like this video?
Play Sound 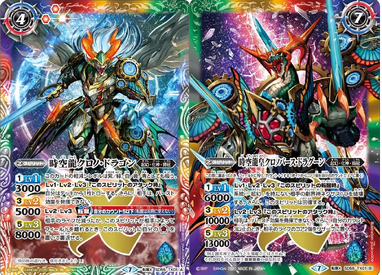 Rebirth (転醒; Tensei) is the main gimmick of the 11th saga of Battle Spirits, introduced in SD55. Cards which possess the keyword are printed on both sides, each side having their own effects, cost, and even differing card types. While some Rebirth cards do not possess the ability, the keyword serves mostly as a "remains on field" effect, as one of the general conditions for the flipping is for the opponent to remove the card from the field, through effects for Nexuses, via any means for Spirits.

The primary condition for Rebirth are counters, having less than a certain number allows the card to flip once they meet the condition, and when a card is Reborn, it adds a counter, making it so the more Rebirths are used, closer the player is to be unable to use them.

Besides double-sided cards, Rebirth cards also first introduced the rarities "Rebirth Rare" and "Rebirth X-Rare". They also brought along checklist cards (more details below). A new area was also added to the board for these cards, the Counter Area (also more details below).

Meanwhile, Zero Rebirth (零転醒, Zero Tensei) requires the player to have zero counters to activate, and adds no counters upon flipping, conflicting directly with vanilla Rebirth, making it so the synergy with Rebirth and counter-based decks is nearly non-existing. This keyword only exists on collaboration cards.

Texts possible for Spirit Rebirths include:

And for Nexus Rebirths, there is:

In CB18, Absolute Rebirth (絶対転醒, Zettai Tensei) was introduced, possessed exclusively by Special Aircraft No. 4 Ultroid Zero. The effect is worded as follows:

In CB21, Sortie Rebirth (出撃転醒, Shutsugeki Tensei) was introduced, possessed exclusively by Nexuses in the "Pilot" family. The effect is worded as follows:

In BS59, Illusive Rebirth (幻転醒, Gen Tensei) was introduced. The effect is worded as follows:

Once flipped by any "Rebirth"-named keyword, the Reborn side contains the following text:

However, Zero Rebirth is an exception, as the Reborn side will contain the following text:

Counter Area is situated outside of the field, and can be interacted with if rules or effects state "counter +X". If a card is reborn and does not leave the field, a specified number of counters is always needed to add to the Counter Area (unless the card itself possesses Zero Rebirth).

As the gimmick is similar to the effects of "Seal"-named Magic cards and The First Ultraman, be careful not to mix up with the cores in the Counter Area.

How to Use Rebirth Cards in the Deck

As the Rebirth cards are double-sided, unlike the normal cards, they do not have a side with the usual black surface with silver stripes and the BS logo. As such, it is a must to use colored sleeves. There are two methods to use these cards. While both methods can be used in the same game, the same copies of a card must be using the same method.

Rebirth Cards on the Field

An example of Zero Rebirth

An example of Six Heaven Rebirth

An example of Absolute Rebirth

An example of Sortie Rebirth

An example of Illusive Rebirth