Mei Merryhadda (メイ・メリーハッダ) is a character in the anime and manga series Battle Spirits Double Drive.

Mei is a short boy with white hair and blue eyes. He wears a blue and black shirt with a mostly blue jacket over it. His pants are white and baggy, with a blue pattern. He wears a furry white hat. In Mistral-Bit's trial, he wears a red crown. He also wears a large card over his body, with blue clothing underneath.

Mei is quite naive and very trusting of others. He also dislikes battling, and when he does, seems to dislike attacking with his spirits. Despite this, Mei still feels a strong sense of duty towards protecting his village and God-King card, Glorious-Sheep.

Mei was first seen running away from his village to protect The SheepTwelveGodKing Glorious-Sheep, which he inherited from his deceased father.

Soon, Mei met Sandrat, who had plots to steal Mei's card. Sandrat lured Mei with candy and told Mei that he was a good person. Mei believed this and was tricked into giving Sandrat his card. As soon as Sandrat got the card, he ran away with it.

Mei then caught up with Sandrat and still didn't suspect him of anything. However, Tatsumi, the leader of the battlers of darkness, appeared, demanding a battle over Glorious-Sheep. Unwillingly, Mei accepted. However, because he chose to never attack during the battle and only rely on Glorious-Sheep's effect, he lost the battle. Sandrat then ran away, and Tatsumi took Mei's God-King.

Later, he went back to his village accompanied by Shunta Mogami and his friends. When Mei was lamenting about losing Glorious-Sheep to Tatsumi, Yoku Albatrosa insulted his battling skills, saying that it only made sense that Mei lost with his defense-focused strategy. The village chief then defended him, saying that having only recently received Glorious-Sheep, it was natural that Mei would have lost. Then, hearing that Eto Etoshinmori was the descendent of the Etoshinmori clan, the chief provided Shunta and his friends with a ship, and some food.

Shunta invited Mei to go along with them on their journey, but Mei quickly refuses, thinking he's too weak. Later, he sits on a ledge, looking off to the distance, and notices that Shunta and Yoku started a battle against some dark battlers. With encouragement from his mother, Mei runs and catches up to Shunta's friends in time to watch them win the battle with their Twelve God-Kings. When he wonders out loud if he will grow as strong as Shunta and Yoku, Eto reassures him that he will, since he inherited Glorious-Sheep.

Together, Mei and his friends then went into a city to restock their supplies, since there would be no other cities for miles after this one. Shunta noticed some kids playing Battle Spirits, and together with Mei and Yoku, went off to join them while Eto and Kinoto went to restock their supplies. Shunta challenges Mei to a battle, and he notices that Mei is improving.

After losing to Shunta, Mei invites Yoku to play with them too.Yoku denied, believing that it seemed foolish to play Battle Spirits just for fun. Then, he brings Mei to the outskirts of the city, where he challenges Mei to a match. Although Mei is reluctant, Yoku forces him to, wanting to test Mei's resolve. Shunta, Eto, and Kinoto tries to stop them, protesting that Mei wasn't ready, but Mei wanted to continue. As usual, Mei doesn't attack, which Yoku reprimands him for. Yoku claims that in Balgard, his home world, Battle Spirits was used for everything. When battling, losing was unacceptable and winning was everything, and that Mei would never take back Glorious-Sheep if he doesn't want to win. However, Mei angrily declares that he did want to win and actually cut some of Yoku's lives.

However, the battle was cut short when General Inui and Kengou, two battlers of darkness, came to challenge the group, with the Twelve God-Kings at stake. Kengou explained that he would be using Glorious-Sheep, and he would only battle against someone who had a Twelve God-King. Because of this, Mei is upset that he can't take Glorious-Sheep back with his own hands, but Shunta reassures him that he will battle in his place.

Shunta was soon able to win back Glorious-Sheep, which was returned to Mei.

Later, the group lured into a trap by Zucchi, who lured Shunta and Yoku away from the group to target Mei, who he considered weak. The two battled, and although Mei was fazed by Zucchi's sympathetic acts, he was able to win with Shunta and Yoku's encouragement.

Afterwards, Eto sensed the presence of a nearby Soul Spot. Mei, Shunta, and Yoku entered the Soul Spot to explore it. They were put under a trial by the rock statue there, and they were eventually able to defeat it in a battle, rewarding Yoku with a green Imagine Brave.

When the group discovered another Soul Spot, Mei attempted to enter, but General Inui entered it first, so he wasn't able to get in.

When the group visited the place where the original heroes had gathered, Mei was confronted by Kiki Beresia. Kiki told Mei that he was a hero's descendent and challenged him to a battle. During the battle, Kiki tried to convince Mei to join her and Tatsumi. Mei, remembering his father's words, refused, wanting to prevent the revival of the evil God-King. This angered Kiki, who proceeded to defeat him with her God-King and took his Glorious-Sheep.

Soon after, Shunta was able to defeat Kiki, and Glorious-Sheep was returned.

Mei uses a white deck. His deck has contained at some point the following: 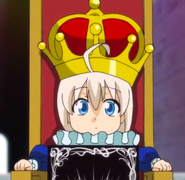 Appearance in Mistral-Bit's trial
Add a photo to this gallery
Retrieved from "https://battle-spirits.fandom.com/wiki/Mei_Merryhadda?oldid=145227"
Community content is available under CC-BY-SA unless otherwise noted.