Meganeko has long, light-brown hair and blue eyes with square pupils. She wore large round glasses at first, but later removed them, as she got contacts. She wears a dark blue shirt under a yellow dress. She has a short-sleeve version of the same shirt for the summer.

She wears a yellow swimsuit with a four leaf clover on it, with a brownish orange skirt.

Meganeko at first seems obedient and quiet. She was often bullied in school, and tended to cry easily. After acknowledging her weaknesses and learning Battle Spirits, the stronger side of her personality came out more. Though still often unsure of herself, she's always determined in battle.

Meganeko lives with her grandfather, Kitan Otonashi, and her pet dog, Nanarin. Her parents are both off in Africa, exploring. She lives close to Bashin, and the two are childhood friends.

Meganeko has always had a crush on Bashin. She often spent time with him, despite not being interested in Battle Spirits. Even though she sometimes found him difficult, she still planned to one day be his bride.

As Bashin started to grow close to J, Striker and Suiren, he would spend less time with her. This

led to her feeling neglected, especially when she heard that they all went to see My Sunshine together. That day, she visited Card Sensei, who was sick. She confessed to him how she was feeling.

On the last day of school, Bashin and Meganeko's class was holding a surprise party for Card Sensei. As he hadn't shows up, Bashin was getting impatient, and wanted to find him. Not wanting the surprise ruined, Meganeko and the others objected. However, Bashin argued that his friends were waiting for him. Realizing this didn't include her, Meganeko was upset, and threw her diary at him before running off. Card Sensei found her in the school, and tried to comfort her.

On Valentine's Day, she went to Card Sensei's apartment. There, she revealed that she'd seen him talking to his turtle Guraguri, and knew that he was a member of Numbers Elite. Her motives for coming, however, were to get Card Sensei to teach her Battle Spirits. Reluctantly, he agrees and becomes her master along with Guraguri. Meganeko chooses the color yellow, is able to win her first match against him.

At the spring tou

rnament, she entered under the name Kiiroko, disguised in a yellow version of Suiren's outfit. She was able to defeat Smile, Card Sensei's former pupil, in the Gunslinger round and make it into the main tournament. There, she lost to Bashin, but was still able to reach him. Bashin was the only one to recognize her under the costume.

After the tournament, Nanarin comes to her room, now with the ability to speak. Meganeko awakened as the yellow chosen card battler. She reveals her stone to Bashin the next day, and has another surprise; She got contacts. Seeing her without glasses, Bashin blushed. She was soon accepted by Bashin's card battler friends.

Meganeko, now with power of her own, tries to support Bashin, especially when she realizes how upset he was after J joined Thousand Spirits Group. She entered a tournament on Bashin's team, Team Shomen Toppa, in order to help get J back.

She and the rest of Team Shomen Toppa were invited to a new tournament, The King Uchuuchouten Cup. When she returned home one day from preparing with her friends, she saw her grandfather leaving with members of

Thousand Spirits Group. While investigating, she found a photo of her grandfather with King Uchuuchouten, and a yellow X-rare. When he returned, her grandfather revealed that he's a card battler, and challenged Meganeko. Meganeko defeated him with the new X-rare, and so he revealed his secret. Before retiring, he was Number Ten.

At the King Uchuuchouten Cup, she and Kyouka had a tag match against her grandfather, and Kyouka's father, who were both brainwashed. They lost and were captured to have the power of their stones extracted. They were freed by J, Hayami and the pets. She and Kyouka returned to watch Bashin's final matches. During the battle with Uchuuchouten, all of the stones are used as lives. When Meganeko's stone is lost, Nanarin loses the ability to speak, and she can no longer access Isekai World.

In the epilogue, she's seen attending a My Sunshine concert, and visiting the Battle Spirits Center with Suiren.

Meganeko is Bashin's classmate and friend, like in the anime. In this version, she isn't a card battler, and doesn't have a significant role in the story.

Meganeko uses primarily yellow, but states that she added some purple later on.

Her deck has contained at some point the following: 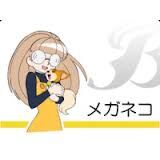