Kizakura Kukuri (キザクラ・ククリ) is a character in the anime and manga series Battle Spirits Sword Eyes.

"Neat and gorgeous justice of light! I summon The ArcAngelia Raraphel!"

Kizakura is a petite, young girl with a light, peach skin-tone. Her eyes are oblong and curve-cornered with small lashes; the color is amber.

Kizakura's hair is short with winged flips on the sides; the color is a burnt-orange. She has a large, choppy fringe, as well as long ear-tails with white angel-wing clips.

Kizakura's outfit consists of a yellow top with white trim, and dark indigo details such as her collar. Her skirt is pleated, and orange in color with a red stripe across the bottom. Underneath she has white frills, and on her legs she has indigo stockings. She has white ankle-boots with orange rims, as well as white cuffs with red bangles. A white, hooded mantle with indigo and orange rims, as well as a white hat with an indigo rim, are included.

Additionally, she carries a wooden staff, adorned with a red gem.

Kizakura is crazy over sweets, and seems willing to help others if she thinks she can get some in return. She isn't very interested in her role as a Sword Eyes. She hates people who will discard anything less than perfect.

Kizakura is the yellow Sword Eyes of Light. She is a member of a group called the Sweetsmates, along with her friends Yamabuki and Kogane, and many unnamed members. She lost her parents, possibly due to abandonment, and had to sturggle to survive when she was younger. This was made especially difficult due to some adults who liked to bully her and other children, taking the food she did work to earn.

She met Tsurugi on a boat, where she had to taste the cookies Tsurugi's grandmother made for him.

She helped Tsurugi and Bringer hide when they were being pursued by droids from Atlantia, and told them about Sora, her childhood friend who could repair Bringer. Although she said she didn't want to travel with Tsurugi and Bringer, she met up with them again in Mt. Viridis anyway.

When they encountered Rirove, the purple Sword Eyes of Darkness, she was angry at him for trying to dispose of Suou, and smashing a dead fruit. Kizakura challenged him, claiming she wouldn't forgive him. However, her yellow charge strategy lost because of Rirove's sheer luck.

Kizakura and the rest go to her hometown in Megallanion, where the Sweetsmates headquarter is located. The Sweetsmates are revealed to actually be a major company, and Kizakura is the president.

They learn that the Sword Brave is located in Sonnenblumme, a large sunflower field, and go to this place for try obtain it. Kizakura digs up a box containing The LightWingsDivineBlade Angelicfeather, which she uses to battle Brau's subordinate, Regen. During the battle, she realizes that her feelings towards protecting her friends are just like Tsurugi's feelings towards wanting to save his mother, and decides to help Tsurugi and rest defeat Yaiba.

Kizakura feels guilty when she's banished from her home of Megallanion, and forced to leave her country. She tries to make Kogane the new president, but she refuses, as the Sweetsmates would rather wait for her return.

On the day of Yaiba's birthday, which is treated as a holiday, Kizakura sold cakes in Kamata. She was annoyed when Tsurugi wouldn't have any cake, and battled him. Kizakura lost, but got Tsurugi to agree to just have fun.

After Bringer was captured, Kizakura went to the palace to try and save him. Yaiba was interested in the jewel on her staff, and wanted to battle her. Kizakura was forced to tell Yaiba where she got it. She explained that it was given to her by a red haired man (actually, Bomber.) He also gave her The ArcAngelia Rarapahel.

Kizakura battled Rebel, after he stole the white Sword Brave of Light, to win it back for Haqua.

After some of the Sword Eyes of Light were captured by Yaiba, Kizakura was questioned about her jewel. Yaiba realized that it came from God, and because only Kizakura was given such an item, he wanted to marry her and have an heir. Kizakura was very against this. Haqua battled Brau, which won her freedom. However, she had to return to the palace with Tsurugi, or Sora and Haqua would be in danger.

Kizakura finally met with Tsurugi again, but the group split up shortly after. Tsurugi went to the palace, and Kizakura went with Hagakure and Suou to Kolga village, which was under attack.

Eventually, she and Hagakure rejoined Tsurugi at the palace.

Kizakura prepared some special, super hot cookies. She planned to feed them to Sora, to break him free from Garudos' control. This was successful. Kizakura promised she would make him some real sweets once they returned to the surface.

In the ritual to summon the Sword of Judgment, Kizakura battled against Amarello.

Later, Kizakura met two kids that she and the others had played with earlier. They were separated from their mother, who was on one of the arks. Kizakura decided to battle against Hagakure, which helped cheer them up, as well as many other children.

For the final battle with Garudos, Kizakura left two cards to Tsurugi, The Light Shooting Hill and Steal Heart. The latter played an essential role in the battle. While Tsurugi battled, she tried to get the Stingers away from the arks.

In the epilogue, she's seen giving out sweets, alongside her friends.

In the manga, Kizakura is a girl on a journey to find the world's best sweets. She joins Tsurugi with little hesitation, and soon after finds her Sword Brave in Sonnenblume. In the epilogue, she goes on another journey with the Sword Eyes of Light.

Her deck has contained at some point, the following: 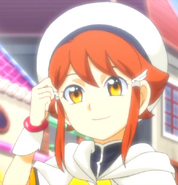 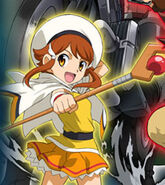 Retrieved from "https://battle-spirits.fandom.com/wiki/Kizakura_Kukuri?oldid=149773"
Community content is available under CC-BY-SA unless otherwise noted.