Kinoto (キノト) is a character in the anime and manga series Battle Spirits Double Drive.

Kinoto has short purple hair worn in buns. Her outfit consists of a red dress with white short sleeves.

Kinoto is loyal to Eto and follows her to wherever she goes. She is often incredulous about the ability of the heroes chosen by the Twelve God-Kings and often mutters complaints to herself.

Kinoto is the maid of Eto Etoshinmori the 8th. They were first seen escaping from General Inui.

Soon, the three were found by General Inui. Shunta then had a battle with him and won, surprising her.

When the chief of Mei Merryhadda's village offered the group a ship to make transportation easier, Kinoto took the position of the helmsman. 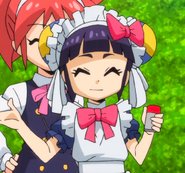 Appearance in Mistral-Bit's trial
Add a photo to this gallery
Retrieved from "https://battle-spirits.fandom.com/wiki/Kinoto?oldid=110829"
Community content is available under CC-BY-SA unless otherwise noted.