Kiku Tatewaki (キク･タテワキ) is a character in the anime and manga series Battle Spirits Sword Eyes.

She has white hair, which is tied behind her like a bow, and pale green eyes. Her face is very wrinkled. She wears a pink hat with a white bow. She has very small glasses on her face. She wears a yellow shirt with a magenta sweater, and a blue and white dress.

She was glad to be able to take care of Tsurugi, never having kids of her own, and worries about him, as she was reluctant to let him leave.

Kiku is Tsurugi's adoptive grandmother. She and her husband Masamune raised him since he was a baby.

She didn't want Tsurugi to leave and search for his mother, but while they were debating this, they were attacked by droids, and she was held hostage. Tsurugi battled to save her, and afterwards, she decided to let him go. She gave him a bag of cookies to take with him. 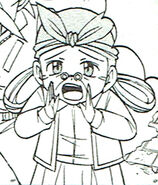