Kanna Kuroda (黒田環奈) is a character in the anime and manga series Battle Spirits Burning Soul.

Kanna is a young girl with blue eyes and short pink hair. She wears a white shirt with pink stripes and pink shorts. She wears very long black socks. Over her normal clothes is a blue jacket, with the hood shaped like a dog.

Kanna is serious and calculating. She has a vast knowledge of Battle Spirits. At times, she can become very excitable. However, she can't battle because her head is overloaded with information.

Kanna is a travel companion and instructor to Yukimura Rekka. She provides him with information about different battlers. The two met when she recruited Yukimura to help win back her village's stadium, by setting up a test battle. Kanna was the one who inspired Yukimura to not quit Battle Spirits after Nobu disappeared.

She was unhappy about having to sleep outside all the time. When Sasuke offered her and Yukimura a place to stay, with an actual bed, she was thrilled. Kanna helped Yukimura by finding him a card which could help him defeat Sengoku-Tiger with his Souldragon. This card was a burst, which could both revive it and give it more BP.

She owns a purple deck. Her deck has contained at some point the following: 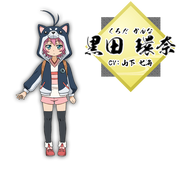 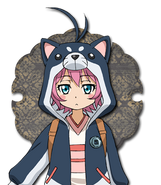 Add a photo to this gallery
Retrieved from "https://battle-spirits.fandom.com/wiki/Kanna_Kuroda?oldid=105209"
Community content is available under CC-BY-SA unless otherwise noted.