Kanetsugu Houryokuin (宝緑院兼続,) is a character in the anime and manga series Battle Spirits Burning Soul.

"Blow, wind! Call out a storm of love! Roar out the cry of love! Soul Burst activate!"

"Rise from the depths of the earth! The EarthShinobi Daibeet!"

Kanetsugu has spiked green hair and green eyes. He is a muscular man. He wears a white shirt under a green sleeveless vest, yellow-ish tan pants, and green boots, He also has green fingerless gloves, and an orange beaded necklace.

Kanetsugu is serious and ambitious. He states that love is his reason for battling, and reason not to lose. He dislikes the outlaws who he felt were destroying Musashi.

Kanetsugu is the leader of a group of green battlers. He has split control of Musashi, along with Toshiie. He was interested when Toshiie was defeated, and wanted to face Yukimura himself, hoping to spread green influence over all of Musashi. Yukimura defeated him, but the battle was close, and Kanetsugu didn't even use his key spirit.

He went off to train himself, having feelings of doubt after his loss. Ranmaru Shikigami appeared there, and challenged him. Kanetsugu defeated Ranmaru, but was confused, as he seemingly wasn't fighting seriously. Ranmaru explained that he believed Kanetsugu could use Soul Core better than anyone, and gave him a new card.

Kanetsugu decided to have a rematch with Yukimura. However, Toshiie had challenged Yukimura first, and Souun Gunjou was also there. Instead, they arranged a small tournament. Yukimura and Toshiie would battle first, then Kanetsugu would battle Souun, and the winner of each battle would face each other.

When it came time for Kanetsugu to face Souun, it was revealed that Souun was once on the same team as him, but left in order to surpass him. Kanetsugu defeated her, using a new strategy instead of his normal core boost, and said that he won because his dreams were bigger than her's.

After beating Yukimura in the final with the power of Soul Burst, Musashi was united under his love. Musashi have gotten the peace that Kanetsugu fight for, but he heard the rumor from Ranmaru that he was a coward hiding from Yukimura's challenge. He wasn't aware that he received such a challenge, because his followers hid it from him. He accepted Yukimura's challenge at Musashi stadium, and he lost under Yukimura's new power: Soul Burst.

After the match, in the stadium, Ranmaru wanted a match with him, as an 'Punishment. Under Ranmaru's key spirit's power, he lost and his gang had become an part of the white gang's army. As for Kanetsugu, he was imprisoned, while Ranmaru and Toukichirou started to spread their own order in his name.

Yukimura, Souun and Toshi fought for Kanetsugu's freedom, after learning the truth. Kanetsugu regretted his actions, and seemed to be trying to change himself.

After the announcement of the Warring States Championship, Kanetsugu, Souun and Toshi all met. They wanted to be on Yukimura's team, but only two of them could be chosen. Thus, they decided to battle over it. Kanetsugu faced Toshi, and won. Because Toshi withdrew after that, he and Souun were the winners by default.

Along with Souun and Yukimura, Kanetsugu registered for the preliminary tournament. He didn't need to battle in the first round, because the other two both won.

He uses a green deck. 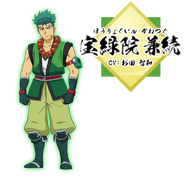 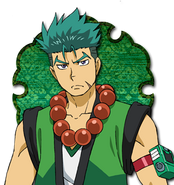