Ian is a small blue dragon with white on its stomach and the tips of its ears. He also wears a yellow collar, and a small pair of glasses

Ian follows Kiriga loyally and very much cares about him. He seems to get tired of the constant jobs Miroku gives to Kiriga.

Ian is Kiriga's partner. He is actually the card Drian. He usually doesn't get along with Mugen.

After Kiriga is chosen by Ultimate-Grand-Woden, Drian becomes Star Drian.

Finally, when Kiriga battles Denebola, he evolves into an ultimate form, Ultimate-Drian. 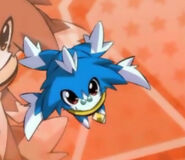 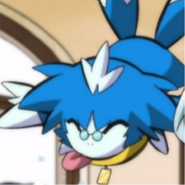 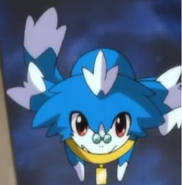 Retrieved from "https://battle-spirits.fandom.com/wiki/Ian?oldid=78241"
Community content is available under CC-BY-SA unless otherwise noted.