Suzuri has blue hair and brown eyes. He wears a blue shirt with a pocket in front, and bandages covering each arm. Around his neck is a red collar. He wears dark blue pants with light-blue triangular patterns, and tall boots. He has a red criss-crossed belt.

He has a silver battle form, with armor covering his shoulders. He always battles with gloves on, in order to not damage the cards.

In Brave, he wears a black shirt under a tan jacket, and blue shorts. His belt and collar remain. He also wears a brown cowboy hat.

Suzuri is obsessed with collecting cards, especially X-rares. He's very particular about how cards are treated, even insisting people to cut their nails before looking at his collection. He doesn't get along with others well.

In Brave, he's mellowed out a lot, to the point of giving exclusive X-rares to Dan without a fight. However, he still prefers to work on his own.

Suzuri is the blue soldier, and a card collector. He was bullied when he was younger, and had a favorite card stolen from him.

When he arrived in Grand Rolo, Suzuri became a member of the Deathmatch Group, who traveled from town to town stealing rare cards. When they attacked the Mimi Village, their leader, Jin, battled against Bashin Dan and was defeated, so they left. Suzuri stayed behind, however, in an attempt to get The Deity Catastrophedragon for himself.

Pretending to be an ally to Dan and the others, he and Dan went to the shrine where the X-rare was kept. Surviving the many booby traps there, they finally reached the card. However, Suzuri was unable to take it. The key to releasing it was for Dan to swap The DragonEmperor Siegfried for it.

Upset that he couldn't have Catastrophedragon, Suzuri refused to leave. Dan proposed to Sophia, who was the village's leader, to battle with Suzuri over the card. Having never battled in Grand Rolo before, Suzuri hadn't expected that battling was painful. However, he was determined to win the card. Using blue deck destruction, he nearly gave Dan a deckout. Dan won the match when he summoned Catastrophedragon, which survived the destruction. Suzuri kicked Dan after the battle, but then apologized for it.

He was next seen in the blue world, where he intended to enter the Grand Rolo Championship and win the X-rare prize. Suzuri was also working for Brustom, the king of the blue world, who would award him with X-rares for his service. Using one of these X-rares, The GiantEmperor Alexander , he defeated his first opponent, Randel.

Suzuri next attempted to find another X-rare, The SevenShogun Beelzebeat . In the process he became possessed, however, by an onmyouji named Kadou Yamigarasu. Kadou battled in Suzuri's place against Kenzo, and was defeated. Upset for being unfairly eliminated, Suzuri planned to ask Brustom to do the match over.

On his way to do so, he found Mai, Serge and Kajitsu being attacked. Serge, who attempted to fight off the robots Kazan sent out, put Kajitsu in Suzuri's care. He and Mai tried to escape, and found the core system which had been effecting Kajitsu, who revealed to them that she actually bears Mother Core's light. While Mai tried to deactivate it, she bribed Suzuri with an X-rare to help protect Kajitsu. He was attacked by Kazan, who tried to choke him with his whip. Suzuri broke free with his nail clipper.

After this incident, Suzuri stayed behind in the blue world, despite the wishes of the other core soldiers, in order to serve his new position as the blue king.

Yuuki, who wanted to save Kajitsu, came to visit Suzuri and requested his help. Suzuri agreed to settle this with a battle, and would receive Yuuki's Walhalance and Gungnir cards if he won. He did win the match, by giving Yuuki a deck out.

Because the soldiers still needed to be united, Dan challenged Suzuri soon after. During the match, Suzuri ran away and hid in his bathroom. He was upset because he couldn't fight for others like everyone else. Yuuki and Dan both encouraged him, and he returned to the battle. Dan was the winner, so he joined them as planned, and returned to Yuuki his cards that he'd won earlier.

Later, the core soldiers all traveled to their respective colored worlds, where they would destroy the Grand Cores of the Horizon Ladders. Each of the core soldiers were challenged by a Pantera robot of their respective color. Suzuri defeated his opponent, and destroyed the Grand Core, but it turned out that the robot itself was the true Grand Core. Their plan was put on hold when Otherworld King bought a section fo Grand Rolo to Earth, as part of his own plan.

When on Earth, Suzuri decided to go to find Brustom again. He was in the green world, replanting the trees he'd burnt down. Suzuri was asked to help, but thought the job was way too difficult. Others came to help, however.

During the final battle, Suzuri stayed with Brustom, but gave Dan The GiantEmperor Alexander to use in the match.

In the epilogue, he attends a reunion of the core soldiers.

After the incident with Otherworld King was over, Suzuri at first enjoyed the star treatment that the bearers of core's light were given. He was even regarded by those who used to bully him. However, he began to feel that he and the others were being treated as a scapegoat for other problems in the world. Due to the backlash, he left on his own and traveled the world. He was later called into the future by Kenzo and decided to take the opportunity. Suzuri became an informant for humanity's forces, and searched for the 12 Zodiac X-rares. He finally found The MagicalTwinsDeity Geminize in Africa, and returned with it to the home base. Dan and the others were surprised but glad to see Suzuri again. Aside from delivering the X-rare, Suzuri had also learned acupuncture, and used it to help Dan's arm, after he was injured by Duc. Although the others still discouraged Dan to jump into a battle right away, Suzuri offered him a warm-up battle, where Geminize could also be tested.

Suzuri continued working on his own to collect the remaining Zodiac X-rares. He was able to deliver The PirateDeity Piscegalleon before the Sophia went into space.

Soon after they returned, he discovered The BalanceDeity Libra-Golem , and was headed to the location of The MachineLionDeity Strikewurm-Leo . At the time, Barone was also searching for the X-rares for the mazoku, and sent Eolus after Strikewurm-Leo as well. Eolus beat him there, but was unable to open the door enclosing it. Suzuri had the key, but Eolus knocked him down and took it first. Barone and Zolder battled over the two cards, with Barone the victor. Though he had no Zodiac X-rares to deliver this time, Suzuri still had one new brave for Dan. And later, he was able to get the final Zodiac X-rare, The SephirothicSheepDeity Sephiro-Aries .

Suzuri remained with the Sophia during Dan's final battle with Barone. In the epilogue, he returned to his own time, along with Mai and Kenzo, and went to New York.

Suzuri uses a blue deck. He focuses on deck destruction. In Battles Spirits Brave he uses a Hybrid deck of several colors. 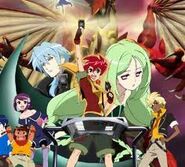