Hayatemaru (疾風丸) is a character in the anime and manga series Battle Spirits Sword Eyes.

Hayatemaru is a giant brown and white eagle. Oddly, he has black hair and eyebrows. He wears a ninja headband and green scarf.

Although he can't speak, he can clearly understand humans, and behaves more like a human than an animal. He cares about Hagakure.

Hayatemaru is a bird and Hagakure's friend. He is large enough to be ridden on and appears when summoned.

He learned to fly in order to save Hagakure from falling off a bridge. 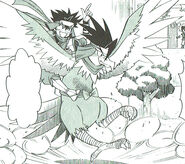 Retrieved from "https://battle-spirits.fandom.com/wiki/Hayatemaru?oldid=82142"
Community content is available under CC-BY-SA unless otherwise noted.