Hashibuto is a feminine looking man with a large build. He has long purple hair which has a heart-shape. He wears a purple top with a pink scarf and skull pin, and brown pants. He is also wearing lipstick.

He seems to be a  mean person, always determined to make his opponents cry. He angers easily, hence the title "Hashibuto the Angry".

He also tends to act girlish, and flirts with almost any guy.

Hashibuto is a member of the Galaxy Triumvirate. He battled against Rei, with a space compass at stake. Rei risked one of his cards. He lost the battle. Afterwards, the Galaxy Triumvirate returned to their leader, Miroku, who was mad at them for failing to get the compass. He ordered them to find it.

He and the others seem to have a history as performers on planet ASAKUSA.

Hashibuto managed to make it to the final round of the Justice Cup against Rei. Though he lost the match, his battling managed to get the audience excited, when they had been previously ignoring the Triumvirate.

When the final battle against Nakes begins, the Triumvirate decides to flee. However, when they notice Miroku isn't punishing them, they feel bad for having never done anything useful, and decide to save him. They break inside of Nakes to pull him out, along with Denebola and Rukinosu.

In the epilogue, they join Miroku on this aplogy trip, while searching for the Ultimate Battle Spirits Neo. 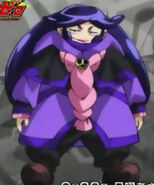 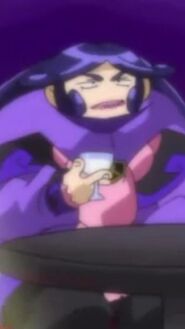 Retrieved from "https://battle-spirits.fandom.com/wiki/Hashibuto?oldid=104096"
Community content is available under CC-BY-SA unless otherwise noted.