Haqua Estoc (ハクア・エストック) is a character in the anime and manga series Battle Spirits Sword Eyes.

Haqua is a petite, young boy with a light, peach skin-tone. His eyes are rectangular and sharp-cornered; the color is a pale-blue.

Haqua's hair is short choppy sides; the color is a platinum-blond. He has a three-parted fringe, as well as thin eyebrows.

Haqua's outfit consists of an azure and white robe. It has golden trim along the azure, and black on the collar. It also consists of black sleeves with golden lining. He has large, round, magenta eyeglasses (which are later revealed to be a special seal because of him being a Sword Eyes), and brown boots. The outfit includes a brown scarf, as well as a brown, buckled belt.

He has a cool, calm personality. Rather pessimistic, he thought that it was impossible to change anything about the world, though his time with Tsurugi and the others changed that.

Haqua is the white Sword Eyes of Light. He is from the ice continent Xamuler, and he came to Atlantia to sell its specialty, never-melting ice.

He let the Sword Eyes of Light stay at his place in Atlantia, but he kept trying to discourage them from opposing Yaiba. He was shocked when they successfully rescued Bringer from the palace.

Tsurugi and the others went to Xamuler to look for a Sword Brave, but Haqua refused to come. Suou, who also stayed behind, asked him why. Haqua eventually explained to him that he once went inside the castle where the Sword Brave is hidden, and saw a ghost. Suou convinced Haqua to come anyway. There, it was revealed that he was a Sword Eyes, and had been using special glasses to hide that fact. Haqua could get into the castle because he was the successor of Vargas, the previous white Sword Eyes of Light.

His Sword Brave was stolen by Rebel, so the others tried to get it back. Not feeling confident enough to battle himself, Haqua feigned an illness, and Kizakura battled for him. He accepted the Sword Brave once it was won back.

After Kizakura was trapped under ice, Haqua decided he had to do something to help. He was able to save her with the golden kettle, which could melt Xamuler ice. As she was only trapped as a result of Gordy accidentally detonating a bomb, Kizakura was angry and wanted to battle him. Haqua decided to battle in her place. Although he hadn't experienced battle in a while, he managed to win. Everyone was impressed by how heated he was in battle, but this just embarrassed him.

When the Sword Eyes of Light were captured by Yaiba, Haqua decided to battle for Kizakura's freedom. He thought that she should go to find Tsurugi, because she liked him. Haqua won the battle, but he and Sora remained prisoners. It was implied that Haqua has a crush on Kizakura.

Kizakura was ordered to find Tsurugi and bring him back. However, Haqua and Sora would suffer some consequences if she didn't return in a certain amount of time. Hoping that Tsurugi would never have to be bought there, they tried to escape. Unfortunately, Garudos stopped them.

In the last part of episode 30, he and Sora seemed to be controlled.

Yaiba ordered Haqua to capture Suou. However, Amarello appeared and challenged him to a battle. Using powers given to her by Grenada, Amarello succeeded in bringing Haqua back to normal.

Haqua and Gordy decided to search for information about Garudos. He and Gordy crossdressed to sneak around the palace. When they learned of a mountain that Garudos and Atlaios climbed, they travelled there and found a Bringer. With Long's help, they found a video. After returning to the palace, Haqua revealed this to Garudos and questioned him about it.

After the incident with Garudos, the Sword Eyes of Light finally succeeded in rescuing Sora. Kizakura promised to give him sweets once he recovered. Haqua was quite jealous of this.

Later, the Sword Eyes went to the sacred rocky mointain, to bring out the Sword of Judgment. In the ritual, Haqua battled against Yaiba.

For the final battle with Garudos, Haqua left The Sacred Gaebolg to Tsurugi. While Tsurugi battled, he tried to get the Stingers away from the arks.

In the epilogue, he's back to doing business.

Haqua appears more than halfway through the manga, after Tsurugi defeats Brau. He was watching the match from the sidelines. Once seeing that Bringer can't turn on, he offers to sell Tsurugi a new droid. However, Tsurugi refuses him and resurrects Bringer. Tsurugi tries to challenge Haqua to a battle, but then discovers that his Sword Eye is gone. Haqua takes advantage of this, trying and failing to sell Tsurugi a white deck. He leaves without revealing that he too is a Sword Eyes.

Haqua and his Sword Brave are captured by Yaiba before the final battle, but is released afterwards. He complains about this, and to make amends Yaiba hires him as a purveyor.

He uses a white charge deck. 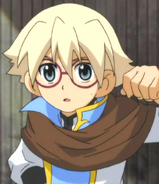 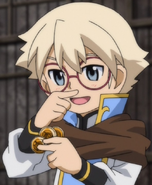 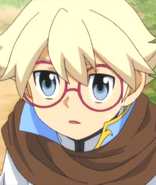 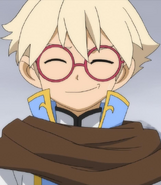 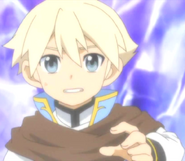 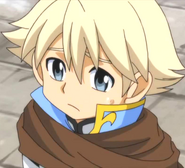 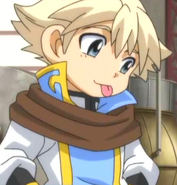 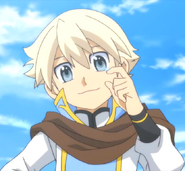 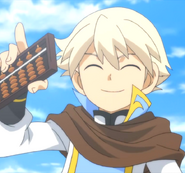 Retrieved from "https://battle-spirits.fandom.com/wiki/Haqua_Estoc?oldid=151626"
Community content is available under CC-BY-SA unless otherwise noted.