Hanzou Hyakki (百黄半蔵) is a character in the anime and manga series Battle Spirits Burning Soul.

"Now, the seal has been opened! Come forth! Strongest king who rules over the strange! Kyuubi Fox!"

Hanzou has yellow spiky hair held up by a dark purple headband. He has grey eyes while the rest of his face is covered by a dark purple face mask. His outfit consist of black fingerless gloves with two red rings and a black shirt with red belts crisscrossed in the center. Over the shirt is a calve-length grey coat with a yellow inside, matching collars with purple linings and torn shoulders. He also wears black pants with a silver belt buckle and red rings on the thighs. He sports red boots with black laces. He usually carries on his back, a yellow and black biwa with a small decorative skull on the head of the biwa.

Hanzou is very quirky. He has a liking for quoting the Story of Heike. He also fabricated an imaginary friendship with his spirit, Fuurin. Aside from that, he possesses more typical ninja qualities.

Unlike the other S-Class battlers of the Battle Spirits Warring Era, Hanzou has no other reason for battling and battles simply for his own enjoyment.

Hanzou is an S-Class card battler, who uses yellow. He battled against Yukimura Rekka, and was defeated.

He appeared later to watch the match between Ranmaru Shikigami and Kanetsugu Houryokuin. After that, he approached Kanetsugu in his prison cell, but didn't intend to try and free him.

Hanzou informed Yukimura, Toshi and Souun of Kanetsugu's innocence. At the time, they believed he was causing trouble in Musashi. However, it was Ranmaru and Toukichirou who were really responsible.

Later, Hanzou had a battle with his student, Okuni Midoriyama, to test her skills as an IBSA battler. He lost the match.

In the last match of the first round in the finals tournament, the IBSA team made their debut and was paired up against the Hokkaido representative team. Hanzou battled against Suehiro Matsushiro and won.

Next, Hanzou battled against Ranmaru Shikigami and won, advancing to the top 8, as the IBSA team's "final stronghold" after the other two members of the IBSA team had been defeated.

In the quarterfinals, Hanzou battled against Kenshin Shirogane. During this battle, Kenshin questioned Hanzou about his motives for battling, and he revealed that he didn't have one and battled only for fun. In the end, Hanzou lost the match.

He uses a yellow deck with a focus on magic. His deck has contained at some point the following: 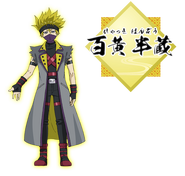 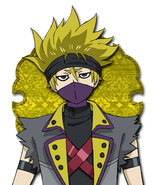