Hagakure Shidou (ハガクレ・シドー) is a character in the anime and manga series Battle Spirits Sword Eyes.

"The Man hiding in the leaves is victorious de gozaru! Win!" - Hagakure Shidou's Catchphrase after winning the battle.

He has dark brown hair and dark-colored eyes. He wears a green ninja outfit, as well as a red and gold forehead protector. He has a green scarf, and red armbands.

Hagakure is sneaky, and perfectly okay with using underhanded tactics for his own benefit. However, he's protective of the forest and will defend those who earn his trust. And he hopes to make his country wealthy.

Hagakure is the green Sword Eyes of Light. He comes from a ninja village, and practices the Yamabiko ninja arts. His best friend is a giant bird named Hayatemaru. He considers them to have a bond even stronger than brothers.

He wants to collect the Sword Braves, and ultimately possess the Sword of Judgment, in order to become a higher-class ninja. He thinks it will be easier than normal ninja training.

He battled against Rirove to protect Hayatemaru from being used as an alchemy ingredient. Though he lost the battle, Rirove only wanted one feather.

Hagakure, along with Suou, managed to escape when the other Sword Eyes of Light were captured by Yaiba. They found Bringer's destroyed body, and took him back to Master Samohan for repairs.

Komachimaru, another ninja bird from Kolga village came to see him. She carried a message, saying that the village was under attack from the Atlantia Army. Hagakure decided to travel there, along with Kizakura and Suou, to save it.

Hagakure learned from Konoha, a childhood friend, that Kolga village was challenged to battle by Atlantia. They were given 100 chances to beat one person, but so far they lost 80 times. Before he could do anything about this, however, Rirove attacked. He attempted to kill Suou, but then Hagakure, Suou and Rirove were sucked into the Green Deity Sacred Tree. There, Hagakure got his Sword Brave. He challenged Rirove to a battle then, declaring that if he won, Rirove would give up on Suou. Hagakure succeeded, and after winning was sucked back outside while the other two remained there.

Once Hagakure made it to Kolga village, he learned that the man who attacked was none other than Sora. He became the 100th challenger, and was able to defeat Sora. Though Sora seemed to be breaking free of the brainwashing, he was taken away again. Hagakure decided to go after him.

Later, Hagakure met two kids that he and the others had played with earlier. They were separated from their mother, who was on one of the arks. Kizakura decided to battle against Hagakure, which helped cheer them up, as well as many other children.

For the final battle with Garudos, Hagakure left Tsurugi the cards Shinobi-Chuuhi and Kengokiji. While Tsurugi battled, he tried to get the Stingers away from the arks.

In the epilogue, he's training with his fellow ninjas.

Hagakure in the manga is first seen battling with Rirove over Hayatemaru. After losing the match, he meets and joins the Sword Eyes of Light. Soon after, Hagakure witnesses Bringer being captured by Brau and gives Tsurugi the Crystal Dragon.

Hagakure does not want to return to his village before gaining his Sword Brave, but ends up going back when hearing that his Sword Brave might be in the Green Deity Sacred Tree. Upon arriving there, he meets Suou. Rirove soon appears chasing after Suou, and Hagakure takes an attack meant for him. Before it hits, Hagakure's Sword Eye repels the attack and his Sword Brave appears. He challenges Rirove to a battle for Suou's freedom. During the battle, Hagakure stresses that he is not the same as he was, and that mistakes are meant for learning from. He wins, and thus Suou goes off his own.

In the epilogue, he goes on another journey with the Sword Eyes of Light.

He uses a green charge deck, with winged bird spirits. 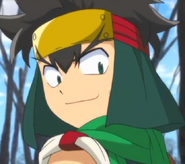 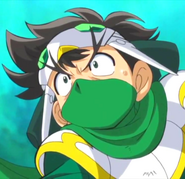 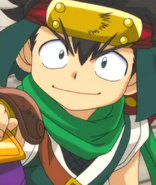 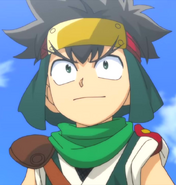