Grenada (グレナダ) is a character in the anime and manga series Battle Spirits Sword Eyes.

She has long brown hair, which she wears a headdress over, and grey eyes. She wears a white dress with blue and ornate gold around the neck, a red gem on it while the sleeves has gold cuffs on them.

She was a very loving parent who cares enough about her children to sacrifice herself for them, and was clearly devastated by Yaiba's betrayal. In the past, she was devoted to helping the people of her country, and involved herself with the lower class when Atlantia was in chaos.

Tsurugi and Yaiba's mother, and the widow of Atlaios. She was the empress dowager of Atlantia, and was said to have been like a mother to all her people. When Yaiba became ruler, she was captured, as she was believed to have been behind the rebellion in Atlantia.

She still lived in Yaiba's palace, as she was likely released from prison after she was cleared of suspicion.

Yaiba requested that she come with him to Megallanion, where he wanted to negotiate with the king about placing a Stinger army in the country. There, Tsurugi met her for the first time. Grenada claimed to be in agreement with Yaiba's plan, but was believed to be brainwashed.

Actually, she really was on Yaiba's side, which Suou confirmed. She revealed that she considered Tsurugi an enemy, and didn't need to see him. Grenada also banished the Sword Eyes of Light from Megallanion, claiming it was for the safety of the people. However, she seemed to feel bad about it afterwards.

On Yaiba's birthday, she spoke to the people of Kamata, inviting them to celebrate.

Grenada went to see Bringer, when he was imprisoned in Yaiba's palace. She said that he should become their ally, and kissed him, which seemed to have some effect on him. This was actually done so that Tsurugi's Sword Eyes of Light could be stored within Bringer.

It was revealed that she was actually involved with the Red Army. Their objective was to create a better government once all the Sword Eyes of Light were gathered. Grenada only sided with Yaiba in order to protect him from an unknown "shadow figure" who was plotting to rule the world from behind the scenes.

Grenada was going to be traded with Rebel, a member of the Red Army, to Tsurugi. However, Yaiba found out that she was deceiving him. He captured her, along with some of the Sword Eyes of Light. Grenada was put in the West Villa, which just consisted of a tower on an island. She claimed that there was nothing she could do anymore, when Amarello came to see her.

She gave power to Amarello, who was actually loyal to her and the red army. With this power, Amarello was able to save Haqua, who was brainwashed.

Amarello helped Grenada escape, and Grenada took her to a royal grave. She revealed that she also had a jewel staff, which Justice Tachibana gave her. He told her when she was a child that she would be a mother to light and dark. That jewel staff was the source of her power.

She and Amarello went to meet up with the other Red Army members. However, they were all brainwashed by Garudos. Bringer appeared and declared that he would protect Grenada. He defeated them, and was able to save them in the process.

The Sword Eyes of Light and Darkness went to the sacred Rocky Mountain, where they would summon the Sword of Judgment. Grenada stayed at Yaiba's palace while they did this. Seeing how much chaos was occurring in Atlantia, where a volcano was erupting, she went with Mars and Rebel to try and calm the people. After Garudos took the Sword of Judgment, Grenada joined up with the Sword Eyes again in Kamata.

Grenada went with Tsurugi, Yaiba and Bringer to confront Garudos. Yaiba was defeated in battle, and afterwards, Bringer was badly damaged. However, Justice and Bomber saved them. Afterwards, Grenada decided to stay with Yaiba until he recovered. When Yaiba apologized to her for having treated her as an enemy in the past, she said it didn't matter, and that she was proud of him for how hard he always worked as king.

Grenada, along with Amarello, watched Tsurugi's final battle against Garudos. Before the battle, Grenada gave him the card Sword Destiny, saying that it would bind him and Yaiba. This card allowed him to triple brave.

In the epilogue, she's watching Tsurugi and Yaiba in the new world, and is remembering Atlaios.

Grenada has only a minor role in the manga. She first appears in Bringer's hologram, and only has a physical appearance in the last two chapters. She seems to be worried about both her sons. 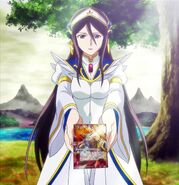 Retrieved from "https://battle-spirits.fandom.com/wiki/Grenada?oldid=150353"
Community content is available under CC-BY-SA unless otherwise noted.