View source
watch 02:19
Wiki Targeted (Games)
Do you like this video?
Play Sound

Gordy Dain (ゴーディー・ダーイン) is a character in the anime and manga series Battle Spirits Sword Eyes.

"Sickle to cut down the light! Guide me on the path to despair! I summon The BlackInsectDemonlord Diabolica-Mantis!"

He has green hair, which covers one of his green eyes. He wears a white shirt, black pants, black and green jacket, and a green bandana on his neck.

He acts silly and childish, and seems to like annoying his allies, calling them cutesy names. He also has a mean and sadistic side. And he is very funny and obnoxious.

He is the green Sword Eyes of Darkness, although he didn't have his Sword Brave. He had his subordinate Cornell attack Pacifice, and scolded him when he failed.

Realizing that he himself hadn't been a failure, Gordy requested to go after Tsurugi when he was reported to be near another sword. He burned down the forest, and his Stinger army took the sword, which turned out to be his missing Sword Brave, The BlackInsectDemonBlade Usubakagero. Tsurugi, angry at him for what happened to the forest, challenged him. Gordy baited him along the whole time, and won the match easily. Though he was unable to capture Tsurugi afterwards, he left, feeling satisfied enough.

Gordy planned to collect the Sword Braves all for himself, and get the Sword of Judgment, even though it was against Yaiba's orders for him. He returned to his home village, a place where he was well liked. The people there claimed that he said he would return when he was successful, and stir the country up with excitement. Instead, he tried to burn it down, to lure Tsurugi out.

He and Tsurugi battled again, with Tsurugi winning this time. He was going to surrender his Sword Brave to Tsurugi, but instead, Tsurugi invited Gordy to come along with him. However, Yaiba appeared, and forcibly dragged Gordy away. He planned to remove his green Sword Eye as punishment for disobeying, but Garudos convinced him not to.

Despite the fact that he'd gone back to serving Yaiba, Gordy still seemed a bit interested in joining with Tsurugi. He started wondering what was different between the world's Tsurugi and Yaiba were looking at.

Gordy decided to return to his hometown in Lemurion. The people were still angry at him for his behavior the last time he went there, however. When he was starting to make up with them, Mars spotted Gordy and captured him. He was bought to Tsurugi. Tsurugi challenged Gordy to another battle, hoping to finally convince Gordy to join with him. Because Gordy did actually care about his hometown, he agreed to join Tsurugi, although acting like it didn't really matter to him either way.

Gordy and Haqua decided to search for information about Garudos. They crossdressed to sneak around in the palace. When they learned of a mountain that Garudos and Atlaios climbed, they travelled there and found a Bringer. With Long's help, they found a video, which they showed to Garudos after returning to the palace.

In the ritual to summon the Sword of Judgment, Gordy battled against Hagakure.

While Tsurugi battled Garudos, he tried to get the Stingers away from the arks.

In the epilogue, he's working in his hometown.

He uses a green deck, with an emphasis on dark spirits and rush. 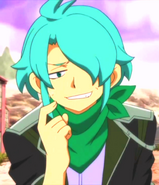 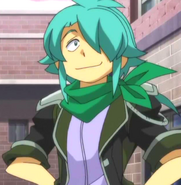 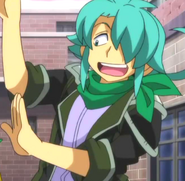