in the anime and manga series Battle Spirits Double Drive.

Eto has purple eyes and long pink hair. It is tied in rings near her face. She wears a large blue and gold bun-like hat on her head. Her outfit is a blue and gold sleeveless dress, with a white under layer.

In Mistral-Bit's trial, she instead wears a large red hat. She wears a large Burst Wall card on her body, with a red gown underneath.

Eto is very polite. She cares for the hero of the 12 God-King, and tries her best to keep them from fighting among themselves. She has an extreme fear of Ultimates and can easily faint at the thought of them.

Eto is a priestess who is the descendant of a family who has served the Twelve God-Kings.

Eto was first seen running away from General Inui, a dark battler, with Kinoto, her maid, and Mofumofu, her pet.

Later, they found Shunta Mogami, who was panicking over being transported to the Spirits World. Eto explained to him that he is a hero chosen by the God-Kings, and he must come together with other heroes in order to stop the resurrection of the evil God-King.

Now, General Inui had caught up to them, and Eto gave Shunta a Soul Core in order for Shunta to turn into his battle form. Shunta won the battle, impressing both Eto and Kinoto.

Eto became the source of rare cards for the group. She and her compass has the ability to sense powerful cards and Soul Spots, which allowed them to find Wind Demon-God. She was also able to detect the location of the Rooster God-King, which Yoku Albatrosa had lost before.

When the group was infiltrating Tatsumi's castle to take back Gale-Phoenix, Tatsumi confronted them. Tatsumi accused the Etoshinmoris of doing little to save the Spirits World and claimed that reviving and controlling the Evil God-King would save the world. Eto objected, believing that Tatsumi would be unable to control it, leading to a battle between Shunta and Tatsumi. Shunta lost, so they had to retreat after Shunta's God-King was taken from him.

Later, Eto told Shunta about the story of the Tiger Hero, who had disappeared on the top of a mountain. Interested, Shunta scaled the mountain, and was able to find the Tiger God-King.

When Shunta mentioned Ultimates when he and Yoku were remodeling Sandrat's deck, Eto quickly fainted when they said how common Ultimates were in their world.

Later, when the group was having lunch, she sensed Kazuya's usage of Ultimates at Tatsumi's castle. After he summoned The Infernal FourDemonLord Bram-Zand and made use of Soul Drive, Eto fainted again. After she woke up, her compass had a very violent reaction. Eto believed that there were two Soul Spots together at the same place. 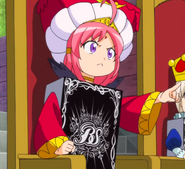 Eto's formal clothing during her speech.

Eto in the last episode of Double Drive
Community content is available under CC-BY-SA unless otherwise noted.