"Sublime holy knight who blooms on the field! Ultimate-Valiero! It's time for your fight to begin!

"Radiance of the Tri-Dragon Deity! Sacred light! Bring me the shine of space! The HolyDragonEmperor Ultimate-Saviour! Burst summon!

Eris has very long blonde hair and green eyes. She wears wing-like clips in her hair. She wears a purple and black top, and black pants. Through her clothes, her belly is exposed, and so are her undergarments.

She has a Santa Claus suit when she is battling in the red deck. Her stomach is still revealed, but there are red decoration balls next to her feet now and she looks like a dancing elf.

Eris is a strong person with a sense of duty. She's willing to take any risk when necessary. She says that her love is the sea of space, and she's a treasure hunter.

Eris is a pirate and captain of her ship, the Venus. She and her crew try to take back stolen items. Her father was rivals with David April, the grandfather of Rikuto and Laila. David was also a close friend to her, as he was often the only one around when her father was out in space.

While attempting to get a card from Basilla, the head of the Seven Galaxy Ganerals, their ship was damaged and crashed onto planet Ice Cube. The Generals went after Garbo, the crew member who had broken into their ship. Eris planned to battle, but Rei challenged them instead. After Rei won the match, Eris gave Laila a challenge to see if she could find the Ultimate Battle Spirits first.

Eris appeared on planet Greensmoothie, and rescued Laila. She actually went to the planet to find an ultimate, though. The ultimate chose Rei, so Eris battled Bomber, who stole the ultimate, to win it back for Rei. She wanted to pay him back for helping her previously.

Eris met Rei again as an enemy, when Rei became a bodyguard for a man named Kaneari. He was a criminal, and Eris wanted to take back what Kaneari stole. They battled, and Rei won, but after the battle the truth came out, and the stolen ribbon was retrieved.

Eris later appeared to capture another criminal, Gargol, who attacked a school in order to steal their Amaterasu-Dragon card.

Eris is called, alongside Rei and Kiriga, by Ultimate-Siegwurm-Nova. He states that he's one of the three pillars, ultimates who guard the Ultimate Battle Spirits from invaders from another dimension. Although Eris didn't have her own ultimate symbol, Nova said that she was chosen anyway. Eris, following the voice in her heart, left to find her Tri-Dragon Deity.

While searching for the ultimate, Eris found an egg, which thought she was its mother. Then, Rukinosu attacked. Though Rukinosu defeated Eris in battle, she was alright, and afterwards, a dragon hatched from the egg. Her name was Chocola, and she was the same kind of creature as Mugen and Ian.

Finally, with Chocola's help, Eris found her Tri-Dragon Deity, Ultimate-Saviour. Using Saviour, she was able to defeat Rukinosu now, and awakened her own ultimate symbol.

Later, Eris met up with Rei's group again. Laila asked Eris to take her up as a pupil. Eris accepted, and invited her to join the Venus, so she could learn things as she worked. However, Laila decided that battle would be the fastet method, and challenged Eris. Oddly, during the battle, Eris seemed to be holding back. However, she revealed that it was because when she was younger, her first deck was a Pentan deck, so it pained her to destroy Laila's Pentans. Deciding to fight with full power, Eris won. Laila decided to return to her own ship after the battle, but Eris assured her she was off to a good start, and she could join again someday.

To get to the fourth class, Eris and Kiriga each battled a robot which Denebola sent to block their path. They won the battles, and the get was opened. The two said that they would wait there for Rei to join with them.

Both Kiriga and Rei were called away from the Treasure Ship on distress calls. Then, Miroku appeared. He challened Eris to a battle, saying he would take her deck if he won, and then would be free to go. Eris said that if she won, they would capture Miroku, and he would have to return the space compass. She lost the battle easily, and the whole time, Miroku was simply mocking her. He didn't even want her deck, and threw it on the ground before leaving. Eris was furious and crushed over this incident.

Eventually, Eris challenged the fusion of Nakes and Miroku. By defeating them, Rei and the others on the Treasure Ship would be able to escape. By calling Miroku a coward, she upset him enough to accept the battle. Eris won this time, with the help of a card Rei had traded her, and Ultimate-Chocodra. However, after the battle, she and her ship and crew were nowhere to be found.

Eris was rescued. However, she did not regain consciousness until Rei returned her ultimate symbol to her. She thought that the events of the battle against Nakes were a dream, though Zero had channeled her during the battle.

In the epilogue, she and her crew decide to go after the Ultimate Battle Spirits Neo. 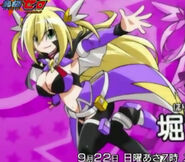