View source
watch 02:52
Roblox: DeepWoken - The Loop
Do you like this video?
Play Sound

Card Sensei is extremely passionate and hot-blooded. He likes looking at pretty women, but tends to become awkward around them. He's also a big My Sunshine fan, to the point of having a collection of rare merchandise. He has a very protective nature.

Card Sensei, Bashin's elementary school teacher, was one of the chosen card battlers, and a former member of Numbers Elite, Number Five. During his days as a Number, he dated Number Eight, and also became the mentor of Number Four. He and Smile secluded themselves in the wild to train. There, they not only trained in Battle Spirits, but became capable of superhuman physical feats. The training ended with a special battle at midnight, which the other Numbers came to observe. When Smile won the battle, he claimed it was because of Card Sensei's weakness, his kindness.

Soon after, Smile disappeared, and rumors about his fate spread. Feeling guilty over this, Card Sensei felt he wasn't suited to be a Number, and left Thousand Spirits Group. However, unbeknownst to most of the other Numbers, he still worked for them secretly. His mission was to watch Toppa Bashin and the other chosen card battlers.

Despite this secret mission, Sensei enjoyed acting as an elementary school teacher. This was aided by the fact that he was infatuated with Bashin's mother, Hayami. At the school's parents day, he arranged a special interview with her, and attempted to have a home conference, though this never came to be. In general, Sensei put special effort in trying to make Bashin a better person, in hopes of impressing Hayami.

More than Bashin, however, it was Meganeko whom Sensei helped. When Meganeko felt neglected by Bashin, who had gone with his card battler friends to a My Sunshine concert, she visited Card Sensei. By accident, his large collection of rare My Sunshine merchandise fell out of his closet. This reminder upset Meganeko further. Sensei told her that Bashin didn't know about her feelings, and wouldn't have left her out if he did understand. Hearing this, Meganeko felt a bit better.

On the last day of school, Bashin's class prepared a surprise party for Card Sensei. Not knowing this, he was depressed when all the students charged out of class as soon as it ended. When he finally went outside and found them, Bashin and Meganeko were missing. Due to a fight, Bashin had gone off to see his Battle Spirits friends. Sensei found Meganeko inside the school, crying. Sensei again tried to comfort her, telling her that she and Bashin would always remain friends, even if Bashin makes new friends.

On Valentine's Day, Meganeko visits Sensei's apartment once again. She confessed knowing that he was a Number, and that Guraguri, his pet turtle, could talk. Then, she begged him to teach her Battle Spirits. With some persuading from Guraguri, Sensei agreed, and they soon began a crash course.

When it was time for their practice battle, Meganeko chose the color yellow. This surprised him, as it was the same color Smile chose. After explaining to her his history with Smile, the battle began. During the battle, however, he went easy on Meganeko. Remembering what Smile had said about Sensei's kindness, she called him on it. Apologizing, Sensei continued for real, and lost to her.

He and Meganeko entered the spring tournament in disguise. There, Meganeko defeated Smile. Smile, who easily saw through his disguise, challenged Sensei afterwards. This time, he defeated Smile. However, seeing Smile's hostility toward Megaenko, Sensei decided to resign from Thousand Spirits Group permanently, in order to protect the children. Soon after, he and Guraguri moved out of Toaru city.

After learning that J joined Thousand Spirits Group, Card Sensei decided to try and stop him. He appeared at an event in Kyoto, and attempted to stop Bashin and his friends from going inside. Though he relented, he stayed to watch the event, and in particular, J's sister Kyouka, who was troubled by her brother's actions. While there, he also met Masako, who was lost in the halls. Learning that she had inherited his former mission, he tried to convince her to protect Bashin and the others. However, she was angered by his betrayal of the Numbers, and only wanted to fight with him. After the event, Card Sensei decided to give his blue stone to Kyouka, so that she could fight as well.

Card Sensei didn't return to Toaru for real, however, until the King Uchuuchuten Cup is announced. However, he had one other thing to take care of; Masako. He stopped her in the Sawaragi mansion, where she was attempting to deliver invitations to the chosen card battlers, revealing that he'd found the last invitation which she dropped. Sensei attempted to make her admit that she cares about Bashin and the others. She refused to listen, and challenges him to a battle. During the match, she used Angel Voice against him, a card he gave her when they dated. Card Sensei told her that Angel Voice, though powerful, is no match for her own voice, and confessed that he loves her.

Soon before the tournament, most of the other Numbers, including Number Eight, were captured by Number Nine. Wanting to save her, Card Sensei went to the Isekai World Dome, despite not having his stone any more. There, Smile is waiting for him, and he's captured along with the rest of the Numbers. They were ultimately freed by J, Hayami and the pets, and return to watch Bashin's final battles. During the battle with King Uchuuchouten, all of the stones are used as lives. When Sensei's former stone is lost, Guraguri loses the ability to speak.

In the epilogue, Card Sensei becomes a teacher in Tonari Middle School. It appears that the stones have been restored, so Guraguri would be able to speak again.

Card Sensei is Bashin's elementary school teacher, as well as a member of Numbers Elite. Unlike in the anime, he is not a chosen card battler. Because Smile joined Numbers Elite later, the training incident never occurred, and Card Sensei never quit Thousand Spirits Group.

He appears later to help Bashin and the others oppose Smile.

Card Sensei uses several different decks throughout, but seems to focus most on yellow and some blue in serious battles. 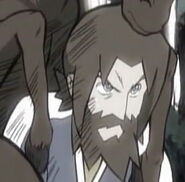 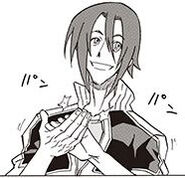