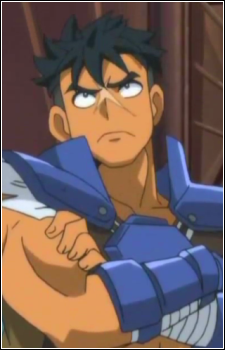 Brau Balm (ブラウ・バルム) is a character in the anime and manga series Battle Spirits Sword Eyes.

He has a very muscular figure, and a scar on his face. His hair is black, and messy. He wears a brown vest, but no shirt underneath, and brown pants, with blue army over his body, and a white cape.

He is very serious and cold. He doesn't tolerate failure. He is obsessed with getting revenge on Bringer.

Brau is the blue Sword Eyes of Darkness. He was born into a family who had traditionally served in the royal family's imperial guard. 14 years ago, he tried to chase down Bringer, when he fled Atlantia with Tsurugi. He failed to stop Bringer, and got his scar in that incident.

Brau finally got to battle against Bringer, after he was captured by the Sword Eyes of Darkness. He won, and thus he considered his revenge complete.

Tsurugi came to rescue Bringer, so Brau battles against him, this time losing. He felt that this would shame Yaiba, and wanted Yaiba to punish him for it. Yaiba planned to kill him, but Garudos convinced him to let Brau live.

To prove his loyalty to Yaiba, Brau volunteered to battle against Haqua, who challenged the king. During the battle, Haqua tried to convince him that being too loyal to Yaiba would only close up his world. Brau didn't want to hear this. He was ultimately defeated.

He uses a blue deck.

Add a photo to this gallery
Retrieved from "https://battle-spirits.fandom.com/wiki/Brau_Balm?oldid=32721"
Community content is available under CC-BY-SA unless otherwise noted.