View source
watch 02:17
New Pokemon Games - The Loop
Do you like this video?
Play Sound

It was drawn by Hideaki Fujii.

Four tankoubon were released. The first two volumes each came with a promotional card.

Differences between the Anime and the Manga

-There are only four chosen card battlers; Bashin, J, Striker and Suiren. Because of this, Nanarin and Guraguri do not appear, and the roles of Meganeko and Card Sensei become very minor.

-Kyouka does not appear.

-Bashin is given his stone, along with a blank card, as a reward for giving a strange man chips. The blank card becomes The DragonEmperor Siegfried in battle.

-Bashin quickly figures out that Suiren is My Sunshine after meeting her. No one else is aware of this secret.

-Numbers Elite is a bit different. There is a Number Nineteen in the manga, while in the anime, the last known Number was Eleven. There is still no mention of Numbers Twelve through Eighteen. Number Six also appears in the manga, but only as a shadow. Aside from Number Nine, Smile, and to an extent, Number Three, the roles of the other Numbers are all very minor.

-Additionally, there was an original Number Four, who was driven away by Smile. Because Smile joined Numbers Elite during the course of the series, as opposed to before it, Card Sensei never quit Numbers Elite. Smile is not human in the manga version, and his real name is Abadon.

-Striker does not get his leg injury at the athletics meet. Instead, he falls down the stairs when trying to protect Bashin and Meganeko from Number Nineteen. Bashin dresses as a nurse and teaches him Battle Spirits. His powers awaken when battling Number Nine.

-Uchuuchouten is sealed in another world at the ending. 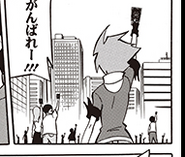 Bashin Dan's back
Community content is available under CC-BY-SA unless otherwise noted.
Advertisement