Start a Wiki
watch 01:50
The Loop (Games)
Do you like this video?
Battle Spirits Brave Wafers ~SunDragon Brave Compilation~  was a candy toy set. It came with a chocolate candy, and random card. One X-Rare, The StarDragonDeity Sieg-Meteorwurm, was available. All cards were previously released (mainly in BSC05). The set included spirit and brave cards in the colors red, purple, green, white, and yellow. 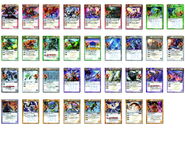 Add a photo to this gallery
Retrieved from "https://battle-spirits.fandom.com/wiki/Battle_Spirits_Brave_Wafers_%7ESunDragon_Brave_Compilation%7E?oldid=93029"
Community content is available under CC-BY-SA unless otherwise noted.