View source
watch 02:17
New Pokemon Games - The Loop
Do you like this video?
Play Sound

A small white mouse. He wears a red stone around his neck.

Often serious, and tends to fight with Bashin when he thinks he's slacking in either school or Battle Spirits. He does genuinely care about Bashin, and does so out of concern. He loves mushrooms, and is a big My Sunshine fan.

Bashin's pet mouse. Bashin got him as a pet after his father left. He was named Aibou, menaing "partner," because this is what Bashin's father used to call him. Even before Bashin's awakening as a chosen card battler, Aibou was very unusual for a pet mouse. He lived in an open miniature house with a bed, inside Bashin's room.

Aibou would normally try following Bashin everywhere. After running off one day, he was nearly hit by J Sawaragi's limousine. Bashin tried to save him, and the car stopped when it saw him. J and Bashin got into a battle soon after meeting, which J easily won. On his way home, Aibou tried to comfort Bashin, leaving him stunned by the realization that Aibou was speaking. As one of the card battler pets, Aibou has a red stone similar to Bashin's. Once Bashin awakened as a chosen card battler, he was able to communicate with Bashin, thanks to it.

Aibou tried to help mentor Bashin, though this sometimes became difficult. When Aibou suggessted that Bashin mix another color besides red into his deck, they got into a big fight. Angry at Bashin for only treating him as a cute pet, Aibou ran off. He met with the other card battler pets and the owners, and compared their relationships to his and Bashin's. When he finally decided to return home, Bashin was gone. Remembering a Nazo-Otona he'd seen during the day, Aibou was concerned that Bashin was battling him. He went to Toaru Mountain, actually a large hill, to find him. There, they were reunited. Bashin was safe, but through a series of misunderstandings, had thought Aibou was going to Brazil, his mother's home, to become a mushroom chef, would first stop in Argentina to see the mushroom of dreams, and wouldn't return for 100 years. They were both glad to be reunited. Bashin said that he'd consider mixing colors, and Aibou apologized for worrying Bashin.

After J joined Thousand Spirits Group, his cat, Okyou joined as well. In order to help bring J back, Aibou and the other pets decided to meet with Okyou. They managed to sneak inside the Isekai World Dome, and met her. Okyou refused to betray J, however, leading Aibou to challenge her with a deck he borrowed from Papa Navi. Though he had terrible Battle Spirits skill, Aibou won the match by luck. However, Number Nine and several guards appeared in the room. Okyou distracted them, giving Aibou and the others time to escape, but still remained there.

Eventually, Okyou and J returned, and the now complete Team Shomen Toppa was invited to the King Uchuuchouten Cup. While the team battled, Aibou and the other pets snuck into the control room, to try and stop Number Nine's plan. When J and Hayami came to their aid, they were successful.

After the tournament, Bashin battled against King Uchuuchouten, using a six life system. Each life represented the stones held by the chosen card battlers. When these stones were destroyed, the spirits inside the pets would also be destoyed. Though Bashin managed to keep Aibou's life throughout the battle, it was destroyed as well after the match, reverting Aibou to a normal mouse.

In the epilogue, before leaving again, Bashin's father gave a new stone to Bashin. Aibou was once again able to talk. He told Bashin that they would always be together.

Aibou doesn't have his own deck, but used a red one given to him by Papa Navi. It is very similar to Bashin's. 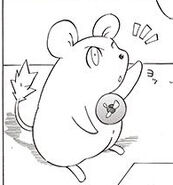